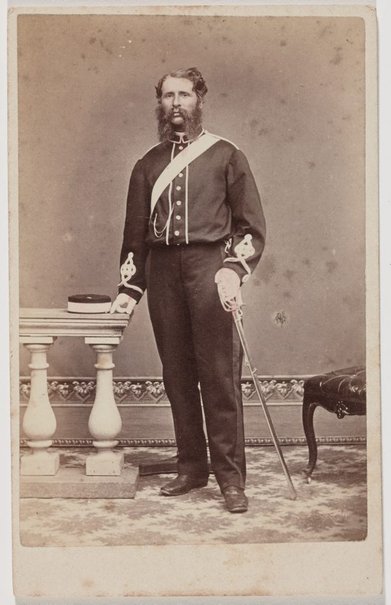 Frederick Frith was a successful portrait painter and professional photographer in colonial Melbourne and Hobart. Born in the UK, he was in Melbourne by 1853 after practicing, he claimed, in London, Brighton, Scotland and Ireland. Frith initially established himself as a portrait and animal painter, moving to Hobart Town in 1854. On his arrival in Hobart, Frith collaborated briefly with the Duryea brothers and Archibald MacDonald, and then with John Matthieson Sharp from 1855 to 1856. Together, Frith and Sharp made coloured portraits and landscape views, Sharp taking the photographs and Frith colouring them. Frith established his own studio in 1856, and by 1859 was producing the first commercial albums of views available in Tasmania, entitled 'Tasmania illustrated'. In 1857, Frederick’s brother Henry joined his enterprise and the pair operated as Frith Brothers, with an additional studio in Launceston. Frith moved back to Victoria in 1862 while his brother Henry remained in Tasmania. In Launceston, Henry was involved in a public stoush with Alfred Bock over the correct use of the sennotype process. He continued to operate until in 1867, when he sold his negatives to George Cherry and moved to New Zealand.

Browse other works by Frederick Frith