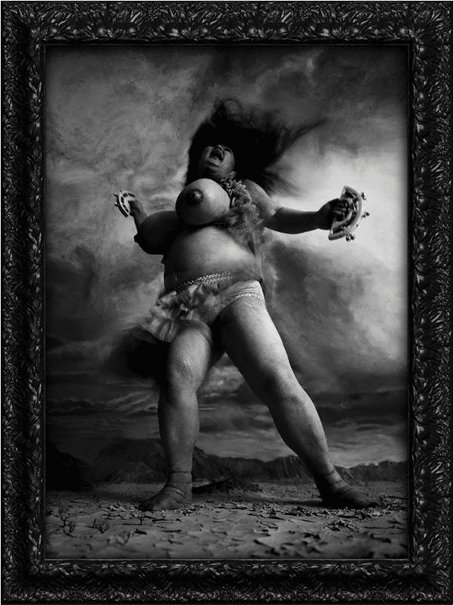 Miwa Yanagi graduated MFA from Kyoto University of Fine Art and she has been working with photography since the mid 1990s. Her work has been seen world wide including at the Melbourne Biennial 1999, Sydney’s Museum of Contemporary Art's 'Neo-Tokyo' exhibition 2001-2002 and the Biennale of Venice 2009.

Yanagi’s photographic work has always comprised highly orchestrated and constructed images, such as the ‘Elevator Girls’ series 1994-1999. Here, eerie scenes of young Japanese women, composed, directed and dressed by the artist, present their uniform, clone-like existence in empty urban environments. In ‘My grandmothers’ 2000 and ongoing, the artist again arranges each scene and digitally manipulates the resulting image to realise the embodiment of an imaginary (and remarkable) future self by a number of young people – as a maternal ancestor 50 years from now. The 2004-06 monochrome ‘Fairy tale’ series uses young girls exclusively but half of them are made up to appear old so that the notions of evil crone or innocent child are completely mixed up.

In the group of ‘Windswept women’, five giantesses dance amidst desolate landscapes. Yanagi has used models of varying ages – ‘the young woman has dangling, wizened breasts, and the old woman has firm breasts, so there’s a physical reversal’. They form a family of travelling performers whose portraits stand four metres tall, resting in giant photo-stands. The decorations of fruit on the frames represent health and longevity.

Continuing Yanagi’s fascination with the tension between reality and fantasy, the ‘extreme scale of the work accentuates the viewer’s experience of the fiction’. Commissioned for the Japan Pavilion at the 2009 Biennale of Venice, Yanagi draped the white building in a black tent, inviting her viewers into ‘a transient home’, ‘theatrical setting’ and ‘the idea of family as performance’. The photographs were also accompanied by a smaller tent, inside the Pavilion, housing a film of the women dancing.

Browse other works by Miwa Yanagi 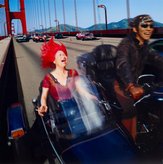