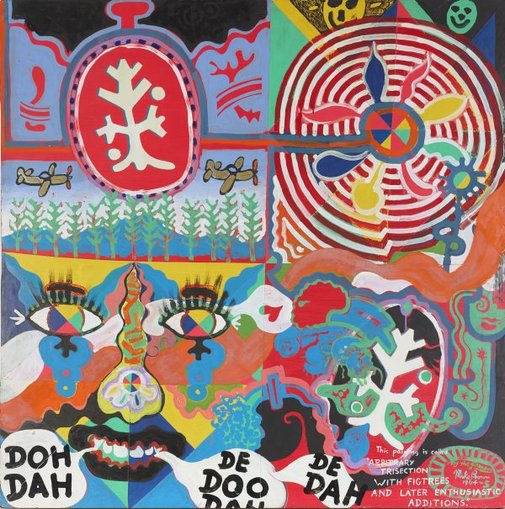 'Arbitrary trisection with figtrees and later enthusiastic additions' 1964-65 was shown at Mike Brown's solo exhibition 'Paintin' a-go-go!' at Gallery A in Sydney in 1965. It was infamously shut down by Detective Frank 'Bumper' Farrell and members of the Vice Squad over public complaints of indecency. Brown had fearlessly set out to shock, amuse and offend the art establishment and supposed 'art lovers', in works that were intentionally obscene and absurd. To this end, Brown drew attention to what he perceived to be a commercialised and conservative art world in Sydney during the 1960s.

Brown's colourful and outrageous marriage of text and imagery disregarded aesthetic conventions, his psychedelic pop art style defying the po-faced and dominant abstraction of the time. Although tame compared to the content of the other paintings displayed, 'Arbitrary' was later used in court as evidence during Brown's trial under the Obscene and Indecent Publications Act of 1901. Brown was acquitted, however, the censorship and prosecution signalled a low point in Australian art, which prompted the artist to leave the city.

Gift of Noel Hutchison in memory of Katherine Hutchison 2015

Browse other works by Mike Brown 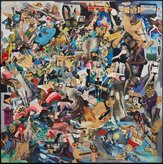