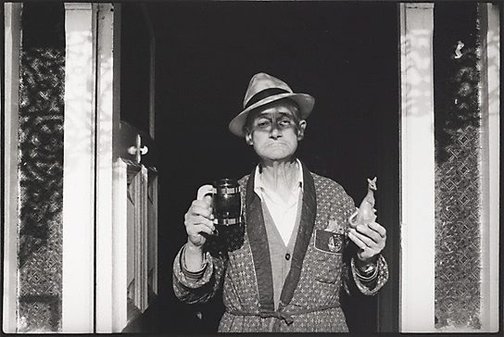 Ballroom dancing, beaches, paddocks and the circus - Philip Quirk is attracted to an array of social performances and places. He studied photography at Prahran College of Advanced Education and later lecturered in Photography at Deakin University, Geelong and Sydney College of the Arts, among other tertiary institutions. After visiting the famous photo agency Magnum in 1980, Quirk became a founding member of Wildlight Photo Agency in Sydney. His photographs of people are often amusing. In 'The Lone Ranger' an elderly gentleman with a set jaw appears holding a beer mug and kangaroo figurine - two clichéd emblems of Australia. Despite this seemingly staged photograph, much of Quirk's oeuvre is marked by informality and his ability to combine incongruous elements or capture the beauty in unusual moments, such as a white goat with neck extended, counterbalanced against a brooding landscape of contrasting tones and textures.

Browse other works by Philip Quirk