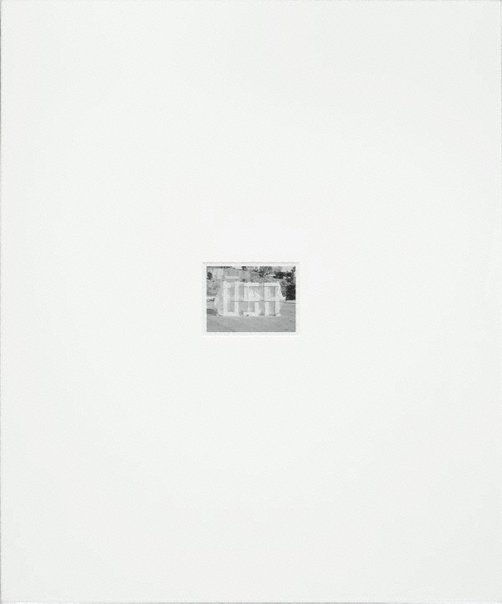 Shannon Ebner was educated at Bard College, NY and Yale University graduating MFA in 2000. She has lived and worked in Los Angeles for 8 years. She held a solo exhibition at PSI New York in 2007, in 2008 she was represented in the Whitney Biennale, NYC and LA County Museum of Art published a book of her work. She was also included in an important group exhibition in 2008 at Gagosian NYC – ‘Photographing the constructed object’. Ebner teaches at USC Roski.

Shannon Ebner’s photographs consistently involve a visceral experience with language, as well as an economy of materials linking her to the conceptual practice of Ed Ruscha and Bruce Nauman. Words and signs are treated as physical entities, subject to destruction and decay. Her laconic style and fascination with palindromes links her to the traditions which appear in both visual and literary forms in the U.S. All of her work deals in one way and another with the nature of politics and monuments. Lisa Turvey wrote in ‘Aperture #188’, 2007: ‘Ebner knows that words and photographs convey temporary, and often false realities…’ so her constant recontextualising of image and sign is not only a way of acknowledging the decay of meaning but also taking hold of meaning and reaffirming its power as a constructive force.

‘Shrouded monument’ plays on scale and grandiosity. A “shrouded monument” can be a romantic (misty) vista of what is considered to be a place of import. In Ebner’s hands, a construction of besser blocks spelling out ‘USA’ is shrouded in plastic and parked in open space in Los Angeles. The tiny photograph of the large shrouded letters in a big mount and slender silver frame is an analogy for systems of government.