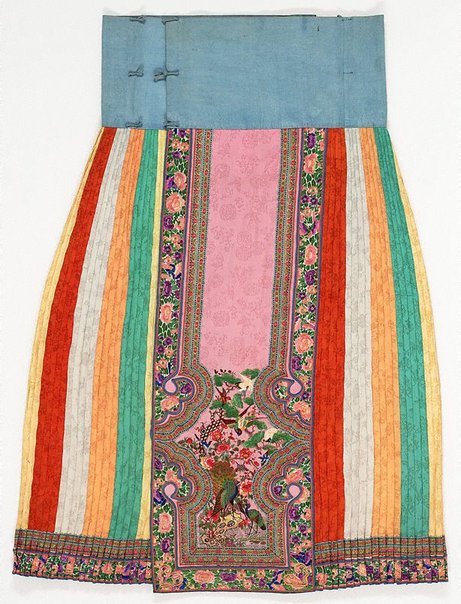 This traditional skirt was of a type that would have been worn by Han Chinese women during the Qing dynasty. This kind of 'wrap around' skirt consists of two identical pieces which are buttoned together on the wide blue-grey band at the waist. The 2 large panelled pieces have an intricately embroidered scene of peacocks and birds in a landscape on the lower part of the skirt, one to be worn at the front and the other at the back. Beside these panels are a number of tightly folded narrow pleats in various colours. The embroidered scene was only necessary on the lower half of the skirt as this was the only area visible when a knee length robe or jacket was worn on top of it. An exquisite floral embroidery decoration continues along the edge of the skirt and on the two main panels.

Often worn by women after they had been married as a sign of their maturity, these skirts were part of formal attire, always worn over some sort of leggings. Colours chosen to be worn were often dependant on age, with older women preferring darker colours, younger women lighter and red of course for weddings or celebratory occasions.