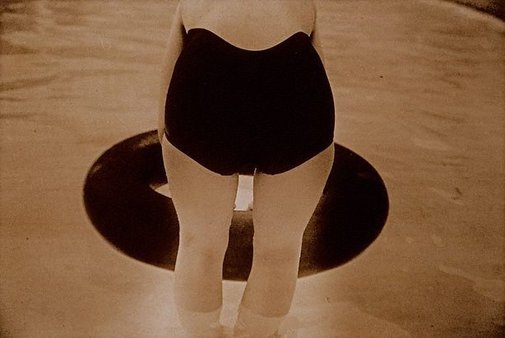 Robert Besanko's essential isolation as an artist has led to the evolution of a personal and poetic vision. Entirely self-taught, he has said that for him, prior to photography, ‘it was a case of a dreamer without a medium’.1 One can sense in his fascination with simplified forms and composition a distinct shift away from realism towards something otherworldly – an effect accentuated by the subtle textural quality of the now obsolete Kodalith paper he used in the printing process. The soft warm creamy tones of the paper gently glow amid sepia shadows, producing an image reminiscent of 19th-century photographs.

Besanko’s highly aestheticised images of women are typical of his work from the 1970 and 1980s. While they are sensual and sensitive studies, a strange and intentional spatial ambiguity implicates the viewer within the photographic act. The artist has suggested in an interview that 'you are aware of what the image can become when you look at the subject. The signature is the lyrical line – the otherness – and the intimacy. I strive for the essence … but more as well. The eroticism is the humanity, if you do not deny it.'2 His images impart a dreaminess as the figure is only ever partly seen or because there is a veiling effect through shadow or the clothes worn. Neither portrait nor nudes, the partial disclosure that occurs in his images makes them tantalising and ambiguous. Besanko’s other images of inanimate objects have a debt to modernism but take on a dream-like effect due to the qualities imbued by the Kodalith paper.

Browse other works by Robert Besanko