Nina, Me and Ricky Jay 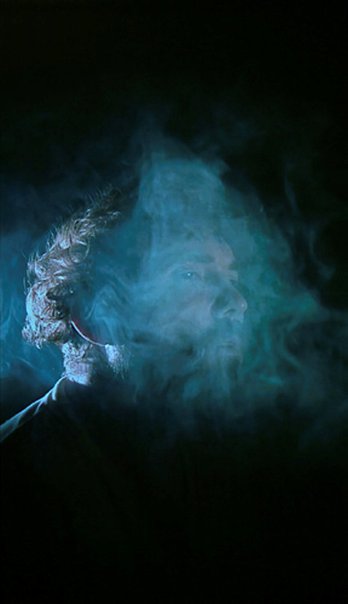 This installation included a mobile sculpture constructed from drummer’s cymbals with sounds of a gurgling bong, while nearby was a massive and heavy cabinet balanced on a wheel rim and stack of CD and Laserdisc players, filled with old monitors playing DVDs, which refer to such pop culture topics as lookalikes impersonating film stars and the mass marketing of the supernatural. It also contains redundant technology including cassette players, a sculpture of Moore made by a blind woman from a verbal description of the artist's appearance given over the phone, a skull, Halloween masks and a medicine ball.

Projected next to the cabinet was 'Nina Me and Ricky Jay' which also considered impersonation and in this mesmerising video a seemingly stunned Moore sings a Nina Simone song. Moore is compelling yet vulnerable and strangely absent: as he performs under hypnosis he appears to see into another world. While these works explore a desire for transcending an everyday self - whether achieved through impersonating someone else, drugs, hypnosis or therapy - in common with many of Moore’s videos they articulate a sense of dislocation and anxiety and of a masculinity which is unsure of itself and how to exist in our contemporary world.

Browse other works by TV Moore