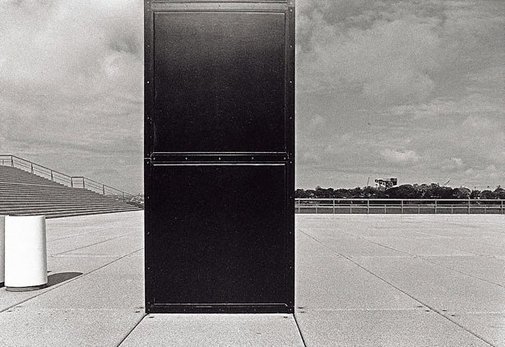 ‘Sydney Australia’ is indicative of the slippage that can occur in Mudford’s photography. Photographed on the Sydney Opera House forecourt, facing Woolloomooloo (a Garden Island crane can be seen just over the top of the Botanical Gardens foliage) this severely formal image focuses on a large dark structure rather than the famous building itself. Beautifully balanced with cloudy sky offsetting the formal lines of the tiled terrace, steps up on the far left and guard rail in the distance the dark structure takes on an almost hallucinatory aspect. It could have landed there much as the alien structures did in the movie ‘2001: a space odyssey’ 1968, however it is the back of a signpost - usually anonymous but now as important as its surroundings.

Mudford’s work proceeds from a simple yet aesthetically rigorous exploration of the urban landscape and built environment. After studying architecture at the University of New South Wales between 1963-64, Mudford worked as a commercial photographer and cinematographer until 1974. One of his earliest influences was the street photography of Walker Evans, who revealed the grace notes within the apparent mundanity of urban life. Mudford brought to this style his own interest in architecture. After holding his first solo show in Sydney in 1972, Mudford received a Visual Arts Board travel grant from the Australia Council for the Arts which enabled him to travel to the United States. He moved to Los Angeles in 1977, where he continues to reside.