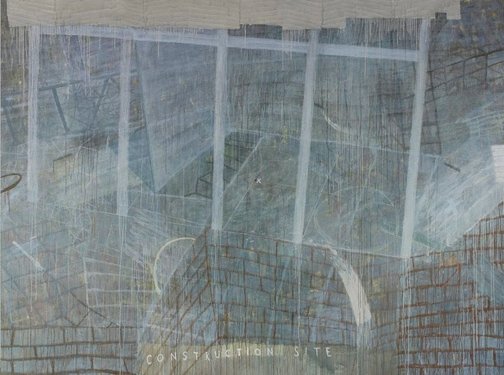 “Milenko Prvacki’s work engages with the reinvention of painting’s language. It is an engagement that is evident in his earliest paintings, made while he was still at art school in Bucharest, Romania in the 1970s, and continued in his more recent series of works, such as ... ‘Construction site’, which were made - or more accurately, ‘constructed’- after his relocation to Singapore in 1992. This dislocation from his home country of Serbia, a result of conflict in the former Yugoslavia, has been significant for Prvacki’s work. It is evident in the themes and subjects that his paintings allude to, such as ‘home’, ‘transit’ and ‘construction site’. These engage with the issues surrounding Prvacki’s migration from Serbia, the fragmented memory of place and the reconstruction of a new life in a foreign environment and situation. It is this notion of construction and re-construction that is particularly interesting and significant in Prvacki’s work. For, while the paintings are informed by his personal experiences, they also engage with the issues that surround the condition of painting today and, in so doing, result in a distinct visual language…”