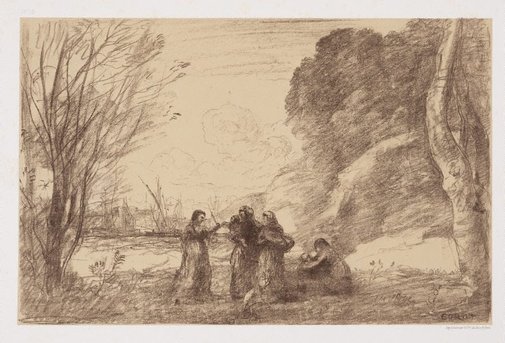 Corot’s formation as an artist was steeped in the principles of classical landscape painting. His early training stressed the superiority of the paysage historique – a category of landscape rigorously composed and ennobled with an historical subject. Yet, at the same time, Corot was encouraged by his teachers to work outdoors directly from nature, to make casual transcriptions of the landscape with fidelity to his perceptions.

An inspired draughtsman, Corot filled sketchbooks while on tours through the countryside, to the forests of Fontainebleau and Normandy, and during trips to Italy and Switzerland. Like other landscapists of his generation, he was committed to the idea that the painter’s role was to render his experience with spontaneity and sincerity: the authenticity of his personal response to the landscape was as important as the depiction of the landscape itself.

As early as 1818 Corot had tried his hand at printmaking and he dabbled in the medium intermittently over the ensuing decades. However, the vicissitudes of printmaking held minor fascination for him, and he showed little patience for the technical acumen that it involved.

In the spring of 1871, during the insurrection of the Paris Commune, Corot fled to the peaceful countryside of northern France, urged by his close friend Alfred Robaut (who would later compile the first catalogue raisonné of his work). In Arras the 75-year-old artist stayed with his friend, the artist Charles Desavary; later, in nearby Douai, he stayed with the Robauts.

Robaut procured sheets of lithographic transfer paper and encouraged Corot to make sketches of the countryside on them. By rendering his impressions on special paper, Corot’s original drawings could be transferred to a lithographic stone by a professional printer at a later date. Transfer lithography (or autographie in French) was ideally suited to Corot’s disposition: it saved him the difficulty of having to work on a heavy and cumbersome limestone block and it afforded him the freedom to sketch in a free- flowing style with a soft crayon, in the studio or in the open air as he pleased.

Twelve drawings were chosen and eventually published in Paris in an edition of 50 under the title Douze croquis et dessins originaux sur papier autographique par Corot. The decision to cap the number of impressions was innovative since at this date the ‘limited edition’ was still far from being a standard practice in the marketing of graphic art. The lithographs – in various tones of black, sepia and reddish brown – were printed on thin, tinted paper bonded to a heavier wove-paper support.

A complete ensemble of this rare production is in the Gallery’s collection, with its original folder and title page signed in pen and ink by Corot, as issued in 1872 by the publisher Lemercier. The set contains an introductory note by Robaut:

We are confident that these sometimes fleeting reflections of the very thought of the Master will be appreciated by Amateurs & by Artists; that is why we have wished to omit nothing, deeming that the admirers of the work of M COROT will be grateful to us for supplying them with the slightest sketches of such a painter in all their spontaneous and frank execution. Those who have been able to approach him and know him will find here something like the echo of his always varied and engaging conversation. Some of these drawings are moreover very finely executed; the great Artist lavished all care on them; they thus embody much of the charm of his incomparable paintings.

Completed partly from memory, and partly from direct observation, these lithographs are among the most fleeting and atmospheric renditions of landscape ever committed to stone. In them Corot represents the countryside as a timeless arcadia; yet plates such as The gust of wind – where a lonely faggot-gatherer wends his way home across a bare, windswept plain – convey a sense of the harshness of rural life. A more pacific and altogether idyllic mood pervades The mill at Cuincy, near Douai, with its hazy poplars dissolving against the sky and their spindly trunks reflected in a still watercourse. Other compositions, such as A family at Terracina, are dreamy evocations of the classical harmony that existed between nature and human beings.

Camille Corot
A family at Terracina

Michel Melot, Graphic art of the pre-impressionists, 1981, illus. cat no 29

Browse other works by Camille Corot 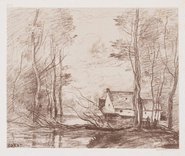