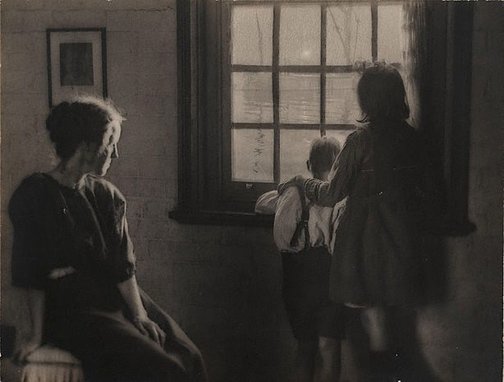 Alfred Chambers was born at Waverley in Sydney. Initially apprenticed to a bookbinder, he eventually became a cadet with the Merchant Marine. After war service he worked for Kodak and later as a newspaper photographer for the ‘Sun’. He established his own photographic studio in Sydney, specialising in child photography. He was also an amateur watercolourist and a founder and first president of the St George Art Society. Later in life he joined the ‘Telegraph’ as a press photographer and remained there until his retirement.

Narrative themes were never as popular with Australian photographers as they were with their European and American counterparts.1 Hollywood and the world of cinema seem to have influenced American photographers in their choice of narratives. In Australia, inspiration more often came from Victorian salon painting. Images of a family waiting for the return of a member – with titles like ‘Expectant’ or ‘The long voyage’ – appeared regularly at annual exhibitions of the Royal Academy in London and were reproduced in widely available publications like the ‘Studio’ or ‘R A Pictures’. Chambers is clearly working within this iconographic tradition and this photograph is closely related to another of his works, ‘A ray of hope’, which uses the same room and models to create a sickbed tableau.2 This image has probably been constructed through the combination of multiple negatives, including one for the seascape visible through the window.

Anna Clabburn., Looking for faeries: the Victorian tradition, 'The legacy of English fairy painting', Bendigo, 2010. no pagination or catalogue numbers

Browse other works by Alfred Chambers 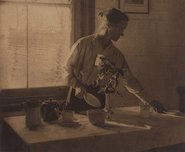 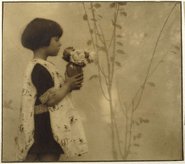