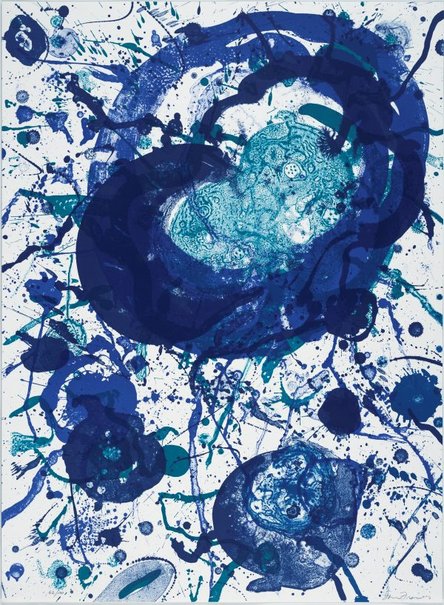 Acclaimed American abstract painter and printmaker Sam Francis first took up painting in 1944 while recovering from a spinal injury suffered during his service as a pilot in World War II. Francis went on to study at the California School of Fine Arts from 1948-1950. During his studies, he was deeply influenced by the first generation of abstract expressionists, particularly the powerhouse figures Mark Rothko, Clifford Still and Arshile Gorky. However, Francis was never to become directly associated with these New York-based artists. Moving to Paris after his graduation, Francis was drawn to the spontaneous and direct brushwork of abstract expressionism’s French equivalent -- tachisme. Throughout the 1950s, Francis travelled extensively across Europe and Asia, where his paintings met great public success. Indeed, Francis was among the first of the post-war American painters to receive international recognition. His travels, especially to Japan, had a profound and lasting effect on his practice and aesthetic sensibilities. Influenced by the palette of the great French modernists Monet, Cezanne and Matisse, the contemplative qualities of Zen Buddhism, and the boldness of American abstract painting, Francis remained dedicated to exploring visual space, essential forms and colour relationships throughout his career.

Francis started working with lithography in 1960. Reflecting a revived interest in printmaking, many important workshops were established in the United States throughout the decade, including the renowned Gemini G.E.L in Los Angeles. Francis, who had returned to California in 1961, would go on to collaborate with many of these workshops’ master printers. His interest in graphic media and collaboration led him to open up his own workshop, The Litho Shop, in Santa Monica in 1970. The six lithographs in the portfolio ‘Michel Waldberg: sky poems’ display Francis’s tremendous spontaneity and lyricism, and demonstrate his success in transferring the intuitive gestural marks of his paintings to the printmaking process. They also showcase Francis’s rigorous explorations of colour, from rich monochromes to brilliant contrasts, and his interest in expansive white space. His collaboration with the French writer Michel Waldberg to produce the portfolio coincided with the release of Francis’s monograph, which was written by Waldberg.

Ruth E. Fine, curator of modern prints and drawings at National Gallery of Art, has described Francis’s prints as “extraordinarily homogenous, as if a body of thought had been full blown, and a lifetime then spent defining it, refining it, exploring every possible nuance.” The portfolio, made in the closing years of Francis’s life, represents this dedicated and concentrated approach, providing a terrific complement to existing holdings of Francis’s work, which include a number of his earlier lithographs dating to the late-1960s. Furthermore, alongside collection works by Frank Stella, Kenneth Noland and Robert Rauschenberg, the portfolio highlights the breadth of printmaking by leading American artists in the latter half of the 20th century.

42/100 [From a total edition of 150 numbered 1-100 and I-L, published by Atelier Desjobert, Paris. Signed on the colophon by Michel Waldberg. There was also an edition of 26 numbered A-Z, which included an orginal work on paper by the artist, and an unspecified number of hor commerce copies ]

Gift of Penelope Seidler AM 2016. Donated through the Australian Government’s Cultural Gifts Program.

Browse other works by Sam Francis