This painting comb is a gift from artist Pedro Wonaeamirri. Pedro opened the Tiwi exhibition 'Pumpuni Jilamara', was a guest lecturer and took part in several children's workshops during NAIDOC Week 2002. He brought the comb from Melville Island specifically for the workshops and decided to gift it to the Art Gallery's collection as a counterpoint to the brushes, ochres and comb collected by Dr Stuart Scougall in the late 1950s.

In a similar manner to the Scougall gift, Wonaeamirri's object was used in the creation of the set of tutini (grave posts) acquired by the AGNSW in 1999. 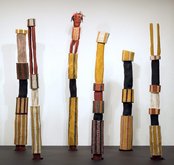