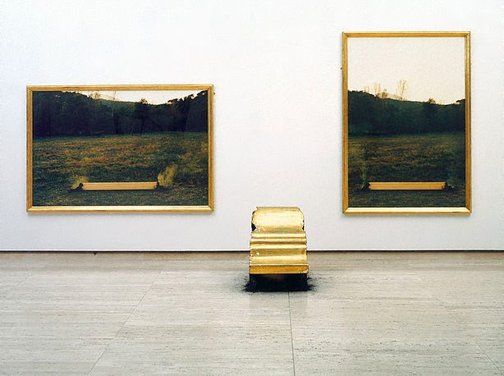 Catalan artist Perejaume’s interdisciplinary art includes painting, sculpture, photography and installation, often incorporating literary elements. Since the 1980s he has made work which considers the traditions of art, in particular the idea of naturalism in pictorial representation. As an historical convention, landscape is ideally suited to such an investigation, and Perejaume has cleverly exploited its allusive potential both from within and outside the gallery space. In an ambitious work from 2003, ‘Retrotabula’, Perejaume worked across four separate locations: Vitoria, Granada, Sant Pol de Mar and Brussels. In Vitoria alone, for instance, he exhibited a photograph of the mountain Orixol which showed a white wall wrapped around the mountain’s sloping bulk, and in a corresponding room he rebuilt the same white wall shown in the photograph. In other rooms he showed a gold and black crown, and works of different media including painting, drawing and photography. This work and ‘Retrotabula’ in its entirety reference how art structures and locates the landscape within a false construct, which is doubly fraught when contextualised within a gallery environment across four geographical locations.

In a comparatively early work, ‘Marc a l’encesa’, Perejaume considers similar ideas. It includes two gilt-framed photographs showing a smouldering segment of gold frame. The photographs are moody and atmospheric renditions of landscape, referencing some of the historically recognised features of the genre, such as a picturesque silhouette of the sun setting against a wooded hillside and a distinguishing horizon line that separates the composition into foreground and background. Along with these characteristics, there is a perceptible shift in light between the horizontal image to the left, a traditional orientation suggesting the vastness of the scene, and the vertically cropped image on the right, which is darker and therefore structurally more blocked-in. This juxtaposition consciously emphasises the illusory nature of the image’s construction by underlining the will to select and compose the scene in a particular way.

Between each photograph is a burnt and absurdly oversized section of presumably the same gold frame shown in each photograph: a frame within a frame within a frame. In a gallery setting the arrangement of the photographs with the stub of gold moulding reveals the complicated and abstract relationship between what is inside and outside the frame, drawing attention to the structural mechanisms at work when looking at nature. This underlines Perejaume’s consideration of the eye as a framing device, and the world as its ocular equivalent. Ultimately it depends on how we comprehend the frame; as the interior enclosed within or as an exterior space whose immensity eludes containment – or as both realms colliding.1