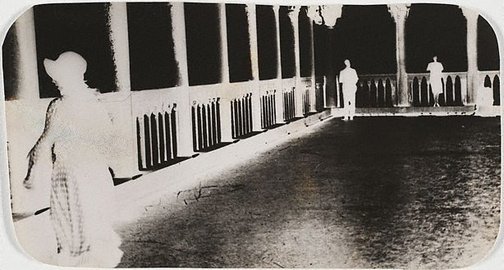 Born in Thüringen in 1890, Franz Roh studied art history, completing a dissertation on 17th century Dutch painting under the supervision of Heinrich Wölfflin before establishing himself as a successful art critic. He contributed to the journals ‘Cicerone, Das Kunstblatt’ and ‘Die Kunst’ before publishing his first book ‘Nachexpressionismus – Magischer Realismus: Probleme der neuesten europäischen Malerei’ [After Expressionism – magic realism: the problem with recent European painting] in 1925.

Responding to the influential ‘Film und Foto’ exhibition of 1929, Roh in collaboration with Jan Tschichold published ‘Foto-Auge: 76 Fotos der Zeit’ [Photo-eye: 76 photos of the time]. Reproducing diverse images drawn from science, art and the everyday, the book importantly featured Roh’s essay ‘Mechanism and expression: the essence and value of photography’ in which he wrote ‘next to a new world of objects we find the old seen anew’, indicating Roh’s positive vision of photography as a new creative visual medium for his time. Denouncing photographs which merely imitated painting or drawing, Roh advocated experimentation and a multiplicity of approaches. His views are sympathetic to Lázsló Moholy-Nagy’s argument for ‘productive’ versus a ‘reproductive’ approach to photography.
Encouraged by Moholy-Nagy, Roh began creating his own photographs from 1926 onwards.

Regularly combining architectural and human forms in both collage and photographic works, Roh produces abstract qualities through his selection and techniques. The probably unique negative print ‘Untitled’ was produced using a technique favoured by Roh: the negative print. This method with its reversal of tones and subsequent loss of detail results in an enigmatic image that also reflects the influence of surrealism.

Briefly imprisoned by the Nazis for his association with so-called degenerate art, Roh ceased making photographs in 1933 but continued making collages and writing on art and photography until his death in 1965.

Browse other works by Franz Roh