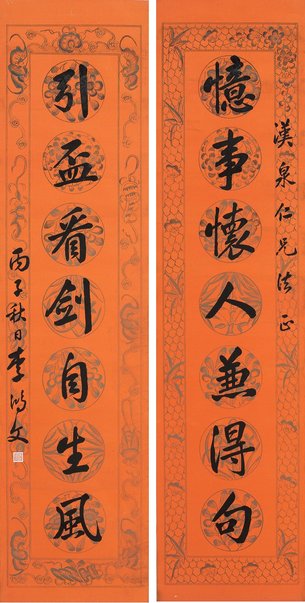 ‘Recalling the past and thinking of friends, that is also an inspiration for poetry;
Holding up a cup while gazing at a sword, which arouses a heroic spirit.’
Inscription and signature: Written for the appraisal of Hanquan, in autumn of the year of ‘bingzi’ [1876] by Li Hongwen.

The couplet is drawn from two poems by Li Shanying (c813-c858) of the Tang and Su Shi of the Northern Song respectively (1). ‘Thinking of old times and friends’ is a ubiquitous theme in Chinese poetry, and is particularly popular among those poets labelled with the style known as ‘wanyue’ (delicate restraint), to which Li is assigned. On the other hand, Su Shi is the foremost poet of the ‘haofang’ (unrestrained and masculine) school, which cultivated an attitude of heroic abandon. While lamenting the past is typical of ‘wanyue' poets’ sentiment, singing the praises of wine and sword, intoxicated with soaring determination, is characteristic of ‘haofang’ poetry. The couplet puts together lines from poems of distinct styles, thus creating a thoughtful tension.

Li Hongwen (alias Yukui) was a native of Huazhou, Guangdong province. He gained the ‘juren’ degree in 1867 and had played an important role in raising local militia forces to resist the Nian rebels in 1864. He later taught at several academies in Guangzhou, including Shilong and Wen’guan.