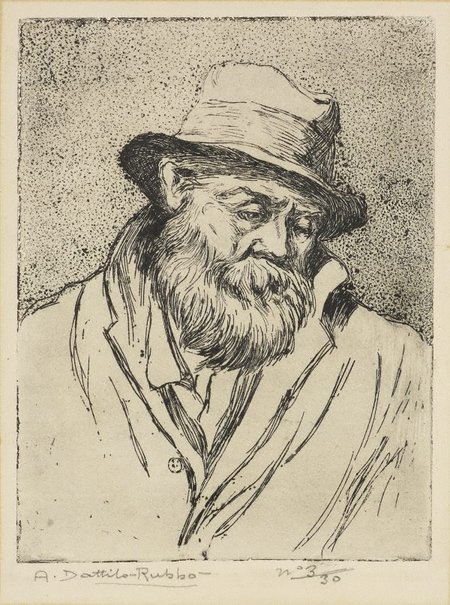 Dattilo-Rubbo was an important painter, watercolourist, draughtsman & teacher in Sydney in the first half of the 20th century.
Amongst his many students were the early modernists Roy de Maistre, Roland Wakelin and Grace Cossington Smith. In its simplicity & understatement this work is not unlike the etchings of Livingston Hopkins, though it probably owes much more to Dattilo-Rubbo's Italian heritage, stretching back to Benedetto Castiglione as etcher and those of the 19th century master of Italian realism (one of the famed 'macchiaioli' group), Giovanni Fattori, who had a similarly plain approach to etching.

The elderly man portrayed in the etching appears to be the same subject who modelled for a very fine drawing by Dattilo-Rubbo 'Study for an old man seated' also in the Gallery's collection.The artist stated 'When I want a model I go out into the parks and look at the old men sitting in the sun. When I see a likely face, I offer him a cigarette, then I suggest that he should make a few shillings cleaning out the studio. Finally, I get him to pose' . [Antonio Dattilo-Rubbo in 'Sunday Pictorial', 6 July 1930]

Etching of an elderly man

Browse other works by Antonio Dattilo-Rubbo

Antonio Dattilo-RubboStudy of a man's head circa 1904206

Antonio Dattilo-RubboHere's a health to His Majesty 1911222