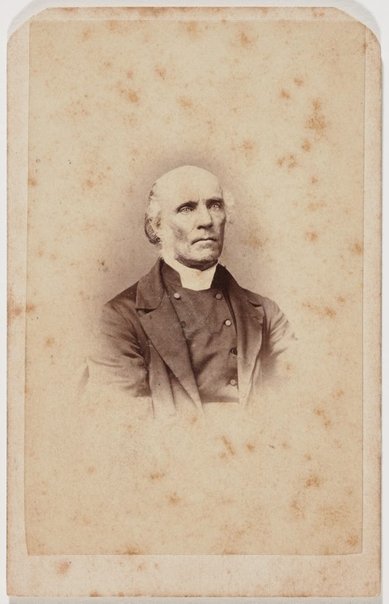 Edwin Dalton was an English portrait painter, miniaturist and prominent society photographer. He arrived in Victoria in the 1850s, possibly in search of gold, and in 1853 he was advertising his services as a portraitist. By 1854 Dalton was in Sydney, where he made portraits of colonial notables Henry Parkes, J S Dowling and Walter Lamb, which were celebrated for their naturalism. In 1857 he added daguerreotypes to his list of services, and opened his Royal Photographic Portrait Establishment in George St. Dalton’s great claim to fame was that he had instructed Queen Victoria in etching, although the letter confirming his royal connections was destroyed in a studio fire in 1862. Nonetheless, it was an achievement that drew many illustrious sitters to his studio. While initially working in daguerreotype and ambrotype, Dalton also produced stereographs and photographic mosaics and frequently embellished his images with crayon. In 1858 he advertised the ‘crayotype’ (now called a biotype), in which a paper photograph was coloured with pastels. In 1865 he sold the business to Thomas Felton, who continued to operate under Dalton’s name, and returned to England. When Dalton’s finally closed in 1870, William Freeman acquired both the premises and the negatives.