Cressida Campbell studied traditional Japanese printmaking at the Yoshida Hanga Academy in Tokyo, in 1985. Shortly after her return to Australia she began making colour woodcut prints utilizing some of the techniques she learned in Japan. However, unlike the Japanese method, whereby each colour is printed from a different block, Campbell uses only one block, with the colours hand-painted in watercolour on the block, which is then dampened and run through the press once.

This print depicts the expanse of Sydney’s Bondi Beach, looking towards the northern end which appears in reverse (due to the reversal of the image when the block is printed)

Browse other works by Cressida Campbell 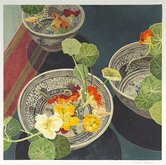 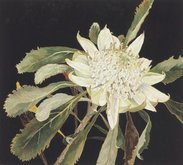