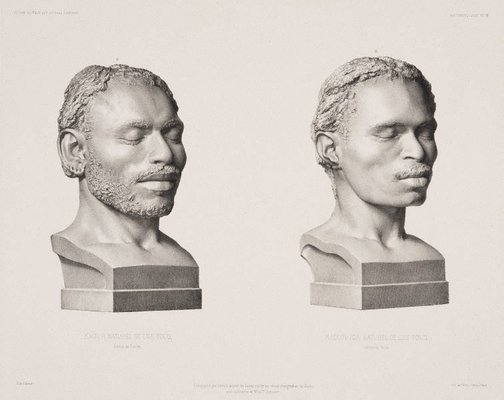 This lithograph by Leveillé, made from a daguerreotype by the Bisson brothers, forms part of the published documentation of the material collected during French explorer Jules Sébastien César Dumont d’Urville’s (1790-1842) 1837-1840 voyage through the Pacific and the Antarctic circle on board the ‘Astrolabe’ and the ‘Zélée’. Plate 16 in the ‘Album Anthropologique’ from the multi-volume publication ‘Voyage au Pôle Sud et dans L’Océanie’, the lithograph depicts a pair of life casts of Torres Strait Islanders produced by Pierre-Marie Alexandre Dumoutier (1797-1871), an anatomist and phrenologist who travelled with the expedition. Dumoutier was commissioned by Dumont d’Urville to collect casts of the indigenous populations of each site visited over the course of the voyage. The life casts were used to substantiate Dumont d’Urville’s belief in a stratified racial hierarchy among the inhabitants of the South Pacific region.

A pseudo-science popular in the 19th Century, phrenology involves the study of the shape and measurements of the skull to predict and determine variations in human temperament. Predicated on the belief that the relative size of different areas in the brain dictated personality and character, phrenological research was often enlisted to support prejudicial racial profiling and endorse colonialist imperatives. In Dumoutier’s life casts, the figure becomes a specimen to be studied. As art historian Stacy Kamehiro notes, while Dumoutier was convinced that all humans shared a common origin and cerebral physiology, his work in the South Pacific was used as evidence to support the argument that each race displayed fundamentally different origins and characteristics.1 This position is articulated in the text written by the entomologist Émile Blanchard (1819-1900) that accompanied the published lithographs. As objects used to provide scientific veracity to the notion of primitivism, the life casts ‘have become notorious as expressions of colonial objectification of indigenous humanity and of the complicity between science, and anthropology specifically, with imperial power.’2

As art historian Bernard Smith suggests, the life casts fulfilled a desire for objective accuracy and scientific exactitude. 3 Photography was seen to satisfy the same agenda. The invention of photography occurred after Dumont d’Urville had set off. Upon his return, he organised to have his research materials photographed. According to Joanna Kane, an artist whose work references early nineteenth century phrenological casts, ‘the life or death mask can be considered the sculptural analogue of the photographic portrait. Both suggest direct traces from life, involve positive and negative, and evoke a mysterious connection between living, breathing subject and captured image.’ 4 In the lithograph of the daguerreotype by Bisson of Dumoutier’s life casts, the ‘mysterious connection’ between the image and the subject is mediated by three separate (yet intertwined) processes. Here, the trace of life is filtered through the life cast, the daguerreotype and the lithograph.