Self portrait (Bayard study i) 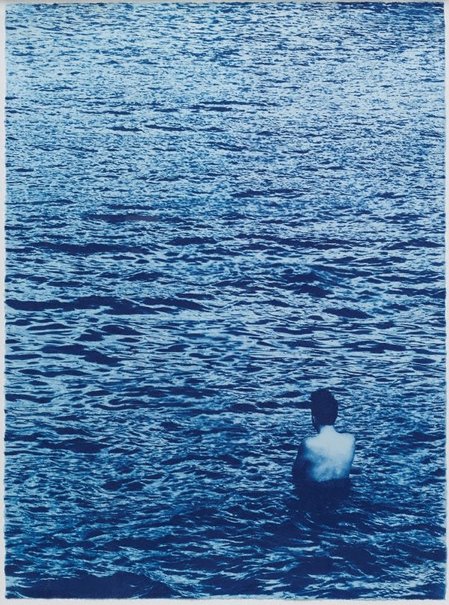 Todd McMillan’s artistic practice, encompassing video and photographic works, could be loosely described as an extended portrait of a figure alone against the world, a role often embodied by the artist himself. Integrating themes derived from Romantic literature and existential philosophy into his work, McMillan weaves poetic narratives of failure and endurance. The solemnity of his thematic preoccupations, specifically his fixation on the concept of the sublime, is often offset by a self-effacing sense of humour. As Carrie Miller notes, McMillan’s work negotiates ‘the aesthetic tension between modesty and majesty.’ 1

Direct references to literary and art historical figures including Casper David Friedrich and Samuel Taylor Coleridge appear throughout McMillan’s oeuvre. In ‘Self portrait (Bayard study i)’, McMillan casts himself in the role of Hippolyte Bayard, a pioneer of early photographic techniques whose contribution to the development of the medium was overlooked at the time. A civil servant with no scientific training, Bayard’s experiments with the photographic process in May 1839 led to the invention of the direct positive print, a photograph made without a negative. Superseded by the more popular daguerreotype process, and facing little attention from the French Academy of Sciences, Bayard staged an artistic hoax as a form of protest. Bayard’s ‘Self portrait as a drowned man’, described by photo historian Michel Frizot as ‘the first “fictional” photograph,’2 depicts Bayard’s supposed corpse naked from the waist up. The text on the back of the photograph relays a fictional account of Bayard’s suicide.

McMillan’s cyanotype is also a self portrait. In the image, McMillan, like Bayard, appears naked from the waist up. With his back to the camera, he stands in the ocean looking into the distance, caught in an introspective encounter with the sublime. McMillan restages Bayard’s fictional drowning. The melancholy of Bayard’s feigned suicide attempt becomes McMillan’s own. The photograph’s blue tone, common among cyanotype prints and produced when solutions of potassium ferricyanide and ferric ammonium citrate are exposed to sunlight, collapses the distinction between the figure and the ocean. The figure is consumed by, and absorbed into, the sea. ‘I like to think that a lot of my work sits between the sadness of leaving and the fear of return,’ McMillan said in 2013.