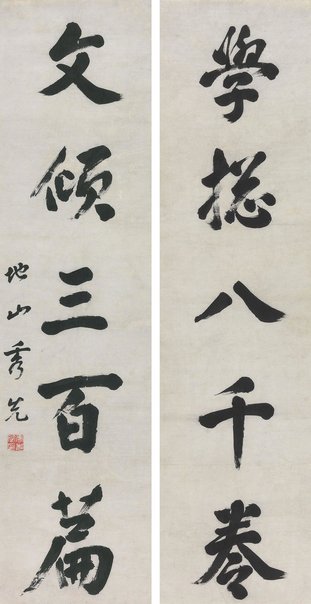 This couplet is borrowed from a poem by Du Shenyan of the Tang dynasty (1) which was written in praise of a courier named Li Sizhen, who was dispatched as an envoy to Hedong (in modern Shanxi). The ‘Three hundred poems’ in the second line normally refers to ‘Shijing’ (Book of odes), an anthology of poems dating from the late 12th to 6th centuries BCE. In general the lines are a compliment to a scholar for his outstanding knowledge and elegant writing style.

Cao Xiuxian (alias Hengsuo, style name Dishan ) was a native of Xinjian in Jiangxi province. In 1736 he gained the rare opportunity of taking a special imperial ‘jinshi’ examination that was set for candidates with extraordinary talents, and he excelled in it. As a successful courtier, he held senior positions in various ministries, including the Ministry of Rites and the Council of State. Because of his profound knowledge and high moral character he was appointed Grand Tutor to the Heir Apparent. He was also one of the chief editors of the multi-volumed ‘Siku quanshu’ or ‘Collectanea of imperial books’, compiled under imperial auspices in 1787. After his death, Emperor Jiaqing (r1796–1820) conferred the posthumous title of ‘wenke’ (cultivated and scrupulous) on Cao, in recognition of his literary accomplishments and firm loyalty to the government (2).

Cao was an eminent calligrapher of the time; Qianlong once called him ‘dashoubi’ (‘a compelling brush’). Both Dong Qichang and Zhao Mengfu’s styles are natural and unrestrained, elegant and refined. However, for some scholars they lacked strength and vigour. Thus it became the fashion during the reigns of emperors Yongzheng (r 1723–1735) and Qianlong to use the Tang dynasty calligrapher Yan Zhenqing’s calligraphy as the preferred model. Over this foundation, the elegant styles of Dong and Zhao were then adopted. Cao’s work shows the influence of Yan, in its grandeur and loftiness, as well as the gracefulness of Dong’s and Zhao’s styles.