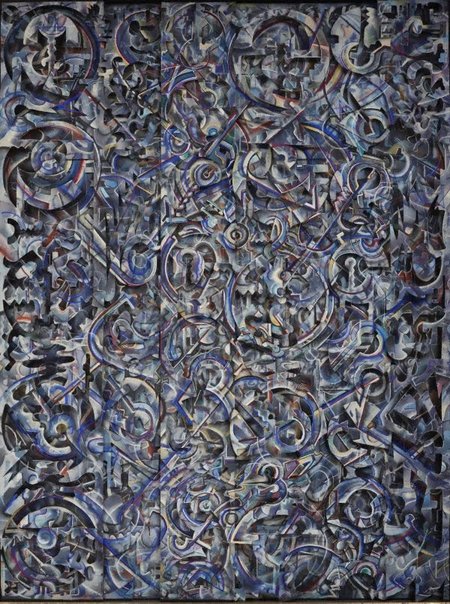 Internationally acclaimed installation artist and painter Asher Bilu was born in Israel in 1936. After spending his youth in a kibbutz outside Tel Aviv, Bilu took up painting shortly before his arrival in Australia in 1957. An early passion for music and playing the violin never abated and, during the 1960s, the artist's exhibitions began to fuse sound, light and painted object to produce installation pieces of mystical beauty.

Bilu's passion for experimentation and his deeply sincere aesthetic philosophy steeped in the mysticism of Eastern tradition, resulted in a series of works created in the 1970s which utilized a painstaking technique of blending textures and colours, employing pure pigments and raised surfaces. The two-dimensional surface plane was abandoned, replaced by a rich, dazzling and intricate three-dimensional web of fragmented plywood shapes, resembling the scattered remnants of a labyrinthine, Escherian jigsaw puzzle.

'Soundscape is from Bilu's 1979 exhibition, 'Infinities', held at Melbourne's Realities Gallery. Bilu presented eight monumental pieces in a darkened shrine-like gallery space, with the works theatrically lit by spotlights to accentuate the strong shadows cast by the multiple layers of elaborate fretted plywood. The space was further enhanced by the accompanying electronic music played throughout the gallery space, composed and performed by the artist, and creating an enveloping experience with a Zen-like contemplative calm.

Bilu's admirers and associates have been many, including Brett Whiteley, who wrote in a foreword for the artist's 1988 exhibition held at The Art Gallery in Melbourne:
"Each picture is a rectangular arena in which description is given, through a perfect balance of acute geometry and Kabbalistic expressionism, of one proposition of the look of the inner galaxy of the mind … he has pioneered a technique which gives his work the speed of calligraphic ink and the monumentality of (ivory) relief sculpture, so that he can produce a large work, tiered on four or five or more levels, that contains the iconographic complexity of an Isfahan carpet, with the loose impudent graffiti of late abstract expressionist painting …"