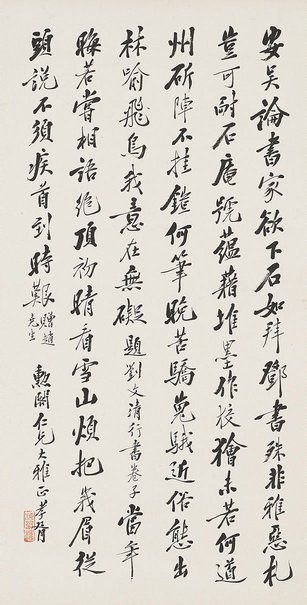 ‘When Anwu made comments about calligraphers,
He paid high homage to [Deng] Shiru.
Deng’s calligraphy is not especially inelegant,
Yet some characters in his badly written letters are unbearable.
Shian is known as being connotative and restrained,
Heaping up inks, his works are overly artful and cunning.
They are not at all a match for He Daozhou,
Who never wore armour to enter a battle.
Even he, his late brushes too wilful and impetuous,
Too devious and strange, they merely mean to satisfy vulgar tastes.
Like a bird flying out from a tree grove,
I am suggesting an unrestrained and spontaneous manner.
(Inscribed on a hanging scroll in running script by Liu Wenqing.)
In those damp and gloomy days we once decided,
To climb up the peak and behold the snowy mountains on a clear day.
Please let’s talk of Mount E’mei again, from the beginning,
Don’t forget it just because there are times of troubles and headaches.
(Written for Zhao Yaosheng.)’
Inscription and signature: For the appraisal of Xunge. Xiaoxu.

The first poem in this work is rather interesting because it expresses the author’s own view on calligraphy. Anwu is the style name of Bao Shichen (1775–1855), a theorist of calligraphy who was regarded as the prime advocate of the ‘beixue’ (stele school) of calligraphy. Deng Shiru (1743–1805), teacher of Bao Shichen, was also recognised as a leading figure in the ‘beixue’ movement during the mid Qing period. His style of innovative seal and clerical scripts proved highly influential for many later prominent ‘beixue’ calligraphers. Shian is the alias of Liu Yong (1719–1804), a renowned scholar-official, who was regarded as one of the four most respected calligraphers of the Qianlong and Jiajing reigns. In his calligraphy he dramatically varies the pressure of his brush; because of his heavy, thick brushstrokes his calligraphy was at times sneered at as being ‘mozhu’ or ‘pigink’ (suggesting it had features that were ‘fat’). He Daozhou refers to He Shaoji (1799–1863), a distinguished calligrapher of the mid Qing dynasty, whose later works, written in regular and cursive scripts, look like works of abstract art, giving each character a remarkable and unexpected shape. Among all of them, except for Liu Yong who was a calligrapher following the ‘tiexue’ tradition, the rest were associated with the ‘beixue’ movement.

Unlike other influential calligraphers who chose either ‘beixue’ or ‘tiexue’, Zheng advocated adopting both traditions. His integration of running script based on the Northern Song calligraphers Su Shi and Huang Tingjian, along with the clerical script of early stele models, produced a very distinctive style in the early Republic.

Browse other works by Zheng Xiaoxu