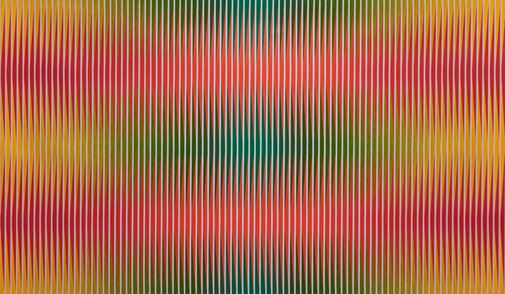 Lesley Dumbrell was born in Melbourne in 1941 and undertook a Diploma in Art (Painting) at the Royal Melbourne Institute of Technology (RMIT) from 1959-62. She taught art at RMIT and Prahan College of Advanced Education from 1966-68, alongside fellow artists including James Doolin and Alun Leach-Jones, who went on to take part in the major exhibition of colour field and hard-edge abstraction, ‘The field’ in 1968. Though her art training had been primarily figurative, through these associations Dumbrell began to move toward an abstract aesthetic in her work.

Dumbrell’s first solo exhibition was in 1969 at Bonython Gallery, Sydney and she has exhibited regularly ever since. In 1975 Dumbrell travelled widely in the USA, UK and Europe, experiencing international artistic trends.

Dumbrell was highly engaged with the women’s art movement and was a founding member of the Women’s Art Register. She was a member of the Lip Collective, writing for the feminist art journal ‘The Lip’ and showing in exhibitions such as ‘A room of one’s own’ at the Ewing and George Paton Galleries and ‘Women in art’ at the Western Australian Institute of Technology, both in 1975.

Dumbrell combines the use of patterning and decoration, traditionally associated with women’s art, with an engagement in the fields of geometric and hard-edge abstraction to produce her visually distinct work, with lines, jagged shapes and repetition, distinct features.

On her discovery of Op Art Dumbrell said: ‘Every artist starts by following the work of artists they admire. For me it was the discovery of Optical Art, particularly the work of Bridget Riley and Jesus Rafael Soto. Optical Art is a way of exploring visual perception, for me it was like discovering a new language. Optical Art was a style that resonated deeply with me and it was the starting point for my studio practice and my career as an artist.’

‘Solstice’, painted in 1974, comprises vertical blue lines overlaid with a repeated pattern of orange, pink, and green triangles, which combine to give an impression of movement and produces a hypnotic effect.

Browse other works by Lesley Dumbrell