John Davis' early sculptural practice was largely informed by the prevailing style of minimal sculpture and hard-edge painting of the mid-1960s, however, he never completely embraced the mode of minimalism. A series of process-based works begun in 1971, where the growth of grass in a field was artificially controlled by the artist, introduced the element of chance into his work and re-established Davis' connection to his environment. Spending twelve months in the USA, Europe and Bali in 1972, Davis began to create site-specific installations and structures utilising found objects, both man-made and directly sourced from nature. A brief visit to Mexico introduced him to the folk practice of papier mâché, which became an integral component to his works from 1973 onwards.

Davis' breakthrough work was produced for the 1973 Mildura Sculpture Triennale: a site-specific installation created on the saltbush-covered bank of the Murray River and using natural materials, including twigs, stones and grass, as well as papier mâché, baling twine, canvas and latex rubber. These humble materials retrieved from the bush, along with Davis' contemplative process of construction, allowed his sculptures to develop with a natural sense of growth and structure.

In 1978, Davis was included in three significant exhibitions, showing groups of works as a cohesive installation: the Fourth Indian Triennale in New Delhi; the Venice Biennale together with Robert Owen and Ken Unsworth; and the inaugural Survey 1 held at the National Gallery of Victoria and Art Gallery of New South Wales.

'Potkarok', 1979-80 (possibly referencing both a water creature from Aboriginal legend (Potkoorok)and a hill region in Victoria) - is a superb example of Davis' assemblages from this period, painstakingly constructed from informal media - twigs bound with cotton or string, and covered with canvas and paper mâché to form an entirely arresting sculptural metaphor for landscape. In 1980, the year 'Potkarok' was first shown, Davis was widely recognised as a sculptor entirely committed to a relationship with the Australian landscape, and yet one for whom the rigour, structural design and spatial organisation of works was also pivotal.

Browse other works by John Davis 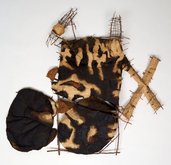