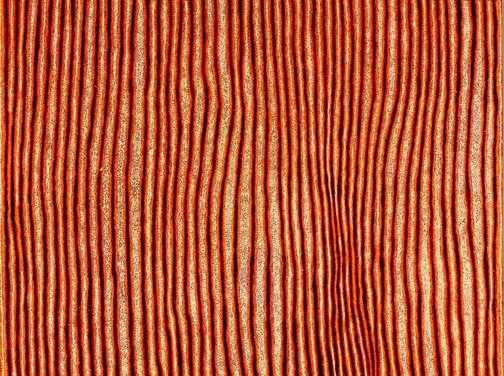 Documentation that came with the painting 'Untitled (Tjiturrulpa)' 2004 states that the work depicts designs associated with the rockhole and soakage water site of Tjiturrulpa, situated in rocky hills, west of Kintore Community. The lines in the painting represent the sandhills surrounding the area, as well as the spears and nulla nullas of a group of men and women who travelled to the site. While at Tjiturrulpa the group gathered jitjara or desert yam, the edible tuber of the shrub Ipomoea costata which grow in profusion hear this site. They also dug for water in one of the soakages at the site.

Elieen Napaltjarri was born at Haasts Bluff in December 1945. Her father, Charlie Tararu Tjungurayi, was one of the founding members of Papunya Tula Artists, and her mother, Tatali Nangala, was also a very successful artist with the company from 1956 until her death in 1999. Napaltjarri grew up in Haasts Bluff and later moved to Kintore with her family when it was first established. The main site Napaltjarri refers to in her painting is Tjiturrulnga, which is slightly west of Kintore and the birthplace of her father. She often sat beside both of her parents as they painted and although doing her first painting in 1996, didn't paint regularly until 1999.

This spectacular painting was the feature work of the exhibition that opened the new premises of Papunya Tula Artists. It is a powerful testament to the presence of Pintupi artists and particularly women artists in Australian art. The artist's parents were both pioneering members of the Papunya Tula cooperative and the artist was witness over any years to the blossoming of the Western Desert art movement. This experience has been borne out in her work since the late 1990s. At this present phase in her career she has fully realised her potential and created a highly accomplished work on a scale not yet attempted by the artist - and reserved for the most distinguished members of the cooperative.

Purchased with funds provided by the Aboriginal Collection Benefactors' Group 2005

Browse other works by Eileen Napaltjarri