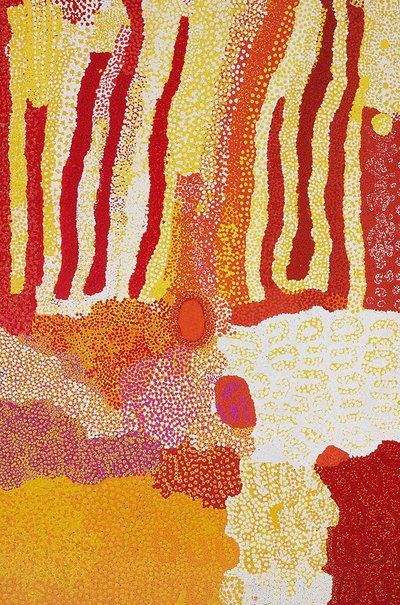 'Marpa' 2001 refers to some of the country of Lucy's grandparents. This country is known as Marpa, after the central rockhole shown here, and is located in the southern Great Sandy Desert. This is important women's country, who are shown throughout the painting, coming here for ceremony. The dot work throughout the painting represents some of the food available at Marpa, in particular, kantilli or bush raisin. The desert oak, or kurkapi, is also found here and depicted as the three solid bands of colour. The majority of the painting depicts tali or sand dunes which dominate the landscape of the area.

Lucy Yukenbarri comes from country that extends along the area now known as the Canning Stock Route to Jupiter Well and Well 33. This includes such sites as Marpa, Piyulpa, Winpupulla and Wirtjinti. The Oxford Companion to Aboriginal Art and Culture states: 'Yukenbarri is known among the Balgo artists for having invented a new style of dotting called kinti-kinti (close-close) in 1990 soon after she began to paint. Her early works followed the standard Balgo methods of forming lines by means of rows of dotting and of outlining icons in a similar way. A quietly creative artist, she then moved to another technique in use by other Balgo painters at the time - single colour fields of dotting - but she alone made a next step of moving the dots so closely together that they converged, creating dense masses of pigment on the surface of the canvas. This, together with her exploration of the visible possibilities of black icons for waterholes and soaks, and her use of dark green and blue pigments, gave her work a distinctive style, producing effects unique in desert Aboriginal art.'

Yukenbarri's husband is Helicopter Tjungurrayi who is also a Warlayirti artist.