Torso and head with Saskia's eyes 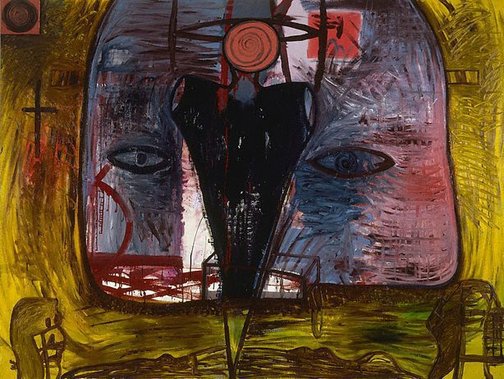 ‘Du hast keine chance, nutze sie’ (you have no chance, make use of it) from 1981 (AGNSW collection) is a clear reflection of Sansom’s early interest in pop imagery and collage. With its broad variety of source images, the work is a confusion of complex, diverse mark-making, figuration and spatial elements. The conflation of colour, shape and imagery creates a violent explosion of fragmented iconography reflecting his concerns with sexuality and appearance, religion and death. Hence transvestites, skinheads, daggers, family photographs and Guston-type urban iconography leap across the surface in a suburban/city clash. Speaking in an interview in 1991, Sansom described his eclectic approach as ‘testing how far you can go on that edge, aesthetic edge, where it ceases to be art and might become corn or tasteless. I try to oscillate on that edge, so that there’s enough on the right side of art to keep it honest, without toppling over into hedonism or vicarious self-satisfied behaviour’.1 Since 1989 this eclectic approach has been heavily influenced by his connections with India, where he found a multitude of new iconography that has continued to feature in his work.

Known for his images of gay culture, sexuality and transvestites including self-portrait photography in drag, Sansom’s work has evolved from pop through performance and documentation, photography and collage, to a more defined symbolism and form with paint and canvas. This move into a more refined figurative style is seen here in ‘Torso and head with Saskia’s eyes’. Painted during a residency at Melbourne University, Sansom plays with the oil paint’s responsive surface while recalling his collage methodology in the layering of space, shapes, colour and painterly textures. The disfigured limbs and disjointed eyes hang in the space and evoke the imagery of Basquiat. Adding to the uncanny feeling of menace, the torso doubles as a beak. The torso motif, used in several of his works at this time, floats in front of Saskia, his baby daughter, and in line with the cross on the left invoking the crucifixion and death, which is reinforced by the coffin shape situated behind the torso. Certainly not a conventional portrait of a child, ‘Torso and head with Saskia’s eyes’ merely infers a child much as it only infers a torso or a head. Reading the painting from depth to surface, Sansom reflects on the scale of time from birth to death, past to future, innocence to malice. The haphazard painterly expression and loose brushwork further confuse the image, creating undulations in both surface and time that enhance the processes of illusion being played out within the complex scale and shapes.

Browse other works by Gareth Sansom 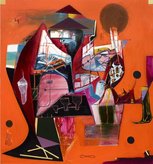