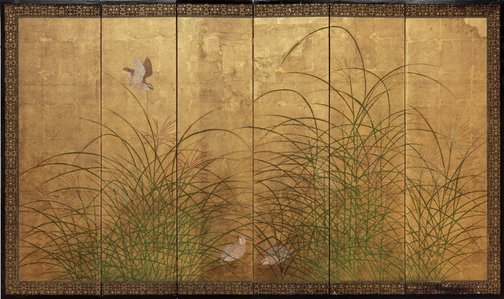 The relatively small six-fold screen shows two quails crouching on the ground amidst a field of pampas grass while a third bird is flying towards them. It is probably the left part of a pair of six-fold screens. Depiction of quails and pampas grass is a classical theme of the indigenous Japanese painting style, 'Yamato-e'. Often depicted by artists of the Tosa school, who catered for the sophisticated taste of the court aristocracy, the scene of quails in a pampas grass field evokes the poetic atmosphere of the autumnal season.

Judging from the careful brushwork, the dynamism in rendering the grass blades under the autumn breeze, the outstanding observation of nature as revealed in the naturalistic rendering of the quails as well as in the subtle use of pigment, this unsigned work was executed by an able artist of the Tosa school in the 18th c. The relative modest size of the screen and the rather simple execution of the metal fittings on the lacquer frame suggest that it was made for a patron who was well-versed in classical studies and possessed a high sense for aesthetics, but who wasn't wealthy.

Browse other works by Tosa School