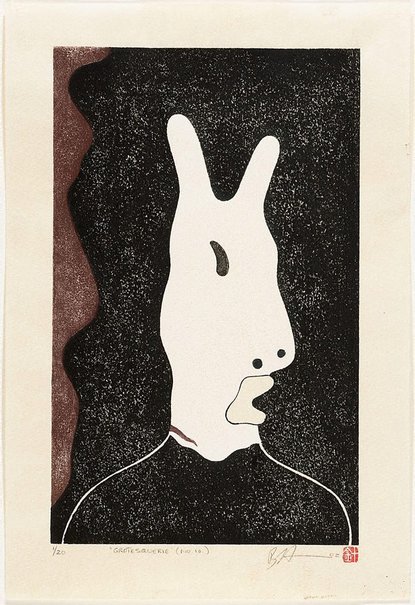 Brent Harris was born in New Zealand and has lived in Australia since 1981. A painter and printmaker, he has developed a distinctive personal visual language concerned with abstraction, and has been influenced by Colin McCahon and Barnett Newman among others.

Painting and printmaking are interconnected in Harris' work. He made his first prints in the late 1980s with master printer John Loane (Viridian Press), including the highly acclaimed 'The Stations' 1989 etchings, which were displayed earlier this year at the AGNSW. In 1999, Harris undertook a residency at the Nagasawa Art Park, Awaji Island, Japan, where he learned traditional techniques of woodblock printing in collaboration with watercolour woodblock print and book makers.

From that experience, Harris' work became increasingly focused on linearity and flatness, incorporating elements of the surreal (such as automatic drawing) and grotesque distillation of the figure. The interlocking, jigsaw-like shapes of each image reflect his painting practice, but also refers to the jigsaw method of Japanese woodblock making.

These prints are part of a series of work Harris made in 2002. Three paintings from the 'Grotesquerie' series were included in the AGNSW's 'It's a beautiful day, New painting in Australia 2' exhibition in 2002-03.