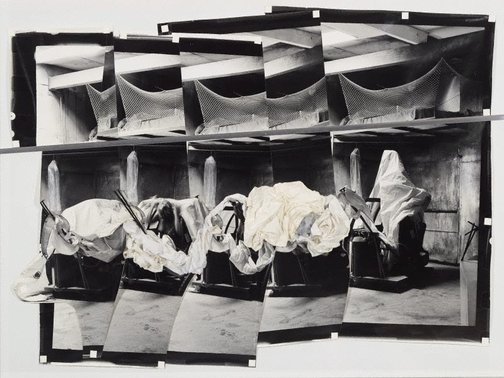 A sequence of five cropped, overlapping black and white photographs repeatedly depict one of the artist's sculptures - a crude re-assemblage of car parts. Inside two of these constructions a nude female figure appears and then uncannily re-appears. The photographs are linked by means of a twisted sheet of cloth, a recurring motif in Goodwin's work associated with memory and human presence, which traces the shrouding fabric depicted in the images.

Alongside other sculptures and photographs in the exhibition "Taxi Dermis", 'Chrysalis-Crisis' re-staged a series of surreal Sydney taxi experiences/daydreams in which the artist addressed conceptual concerns regarding the juncture between body and architecture as well as urban infrastructure and public space. The taxi is a model of what Goodwin might classify as an 'exoskeleton', a prosthetic body/building that undermines those aforementioned dualities in its site-free activities around the city.

He explains that 'The Perspex protector is very important architecture because it creates a small home within the public building of the taxi. The taxi is clearly an extension of public space - an apparatus that stretches from place to place in a variety of elastic rhythms. The thin veil of the taxi bubble, which I call 'Taxi-dermis', speculates not only about minimum architecture but also about habitation within public space'.

Gift of the artist 2012. Donated through the Australian Government's Cultural Gifts Program

Browse other works by Richard Goodwin