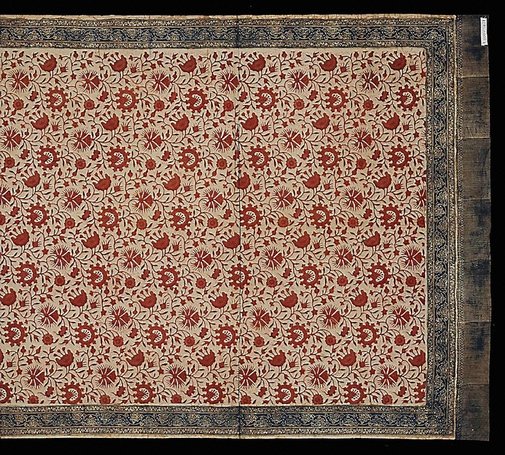 The province of Jambi on the Indonesian island of Sumatra has a long tradition of textile production and usage. In addition to making their own decorative cloths, the people of Jambi also imported textiles from such places as Palembang and Aceh on Sumatra, Java, India and eventually Europe. Purchased for use in Jambi, this sarong is probably a product of the commercial textile industry in Aceh or Palembang.

As a result of more than 1000 years of international trade, textiles from Jambi include patterns and designs from different regions, as well as those invented locally. Textile patterns from India particularly affected the designs and motifs of Jambi textiles. This piece is similar to chintzes produced along the Coromandel Coast of India in the nineteenth century. It has a triple border (a wide central band flanked by two narrow ones) with a fringe-like design at either end, and the central panel displays regular rows of floral motifs. Textiles used in Jambi often combine several different types of floral decoration on one cloth. Also typical of these cloths is the symmetrical arrangement of flowers in a row. The border with its combination of narrow and wide bands filled with meandering vegetal scrolls was also popular in India and Jambi.

The people of Jambi used these cloths to wrap sacred knives (kris), to pay fines, and as high-worth trade items. Because flowers and fruit indicate fertility, such textiles were common wedding gifts. Flowers are also pleasing to spirits, and are therefore suitable for rites of passage such as weddings and funerals. Families wrap corpses in these cloths during the period between death and burial. These highly valued textiles are heirloom cloths, passed down by families and used by generation after generation.