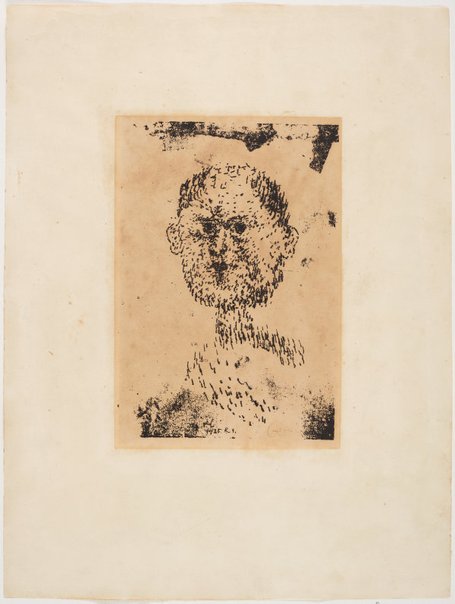 As revealed in one of Carl Plate’s letters of introduction from the Commonwealth of Australia and kept in the Notanda Gallery archives (AGNSW Research Library and Archive), Plate travelled to Paris aiming to acquire prints and paintings which would eventually be exhibited in Australia. It is likely that Plate acquired 'Head, bearded man', along with the Klee drawing and the Picasso etching in Paris in May 1940, before leaving the French capital on 2 June, on the eve of the one and only Nazi air raid.
In April 1950, Plate’s sister, the sculptor Margo Lewers, initiated and organised with the NSW branch of the Contemporary Art Society (CAS) a loan exhibition entitled Art Without Epoch. The society drew upon artworks in private collections, many owned by refugees and immigrants, as well as expatriate artists and writers who returned to Australia during the war and presented an ambitious exhibition of 187 works from 39 collectors. Carl Plate lent 14 works including 'Head, bearded man' and 'The three Orientals' by Paul Klee, along with prints by Picasso and Nicholson.
The years 1920-33 at the Bauhaus form the centre of Klee’s career, during which time he undertook a heavy schedule of lecturing and supervising craft workshops, and devised voluminous theoretical notes based on his teaching. During those years, he developed the abstract compositions now known as ‘magic squares’ in a range of paintings, drawings, and prints, but he also continued to paint dreamlike pictures filled with fanciful inhabitants of earth, sea and sky, and portrait studies such as the lithograph 'Head, bearded man'.

Browse other works by Paul Klee