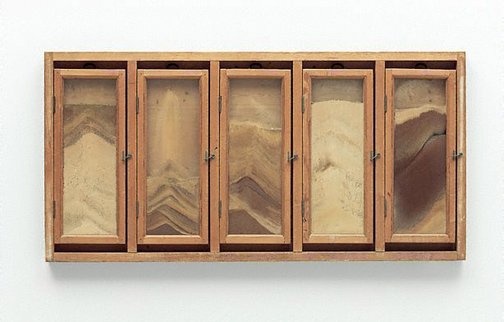 One of the most subversive artists of the 20th century, Dieter Roth abandoned an early practice as a constructivist and moved rapidly through a number of artforms without ever becoming part of any school. In 1960 he saw one of Jean Tinguely’s self-destructive machine performances and was fascinated by the way the assemblage flung stuff around and ended up completely destroying itself. ‘I was consumed with envy … Tinguely had made something that seemed right to me.’1 From that moment Roth’s art began to concentrate on the processes of time, life and decay. Curator Klaus Biesenbach noted in 2004, during the Museum of Modern Art/PS1 Roth retrospective exhibition, that time was a significant structural part of the work: ‘The processes of growth and decay are constitutive strategies of his oeuvre, and the concepts of collecting, archiving, record-keeping, accumulation, quantity and quality, entropy and order characterize the whole exhibition’.2

In the late 1960s Roth began a series of works made from food, for example in 1971 he enclosed a banana under glass, allowing it to decompose to produce something like a sensually seductive abstract painting. This kind of work would never be complete as it would remain subject to further deterioration and infection. One of his chocolate pieces, in the collection of the Staatsgalerie Stuttgart, consists of a garden gnome wrapped in chocolate, with only the tip of the pointed cap sticking out. The object was enclosed in a glass case along with insects that began to consume the chocolate while spinning their silk and partly obscuring its original form. At a certain point (when the oxygen runs out) the process stabilises but the case was opened when it was moved for a loan exhibition. The colour immediately changed, becoming a snowy white. Like Marcel Duchamp’s response to the cracking of ‘The large glass’, Roth embraced this accidental aesthetic enhancement.

The olfactory quality was initially important to Roth in choosing his materials, hence the chocolate and his use of yoghurt. ‘Spice window’ is such a piece although the aroma naturally diminishes with time and the spice is enclosed in a fairly air-tight case. Once again insects have lived in the layers of coloured spice drawing delicate trails through the material and leaving their cases on its surface. Like Beuys and Duchamp, Roth always challenged the line between art and life. He once insisted his friend’s kitchen was indeed an artwork and it was subsequently bought by a museum.

Browse other works by Dieter Roth