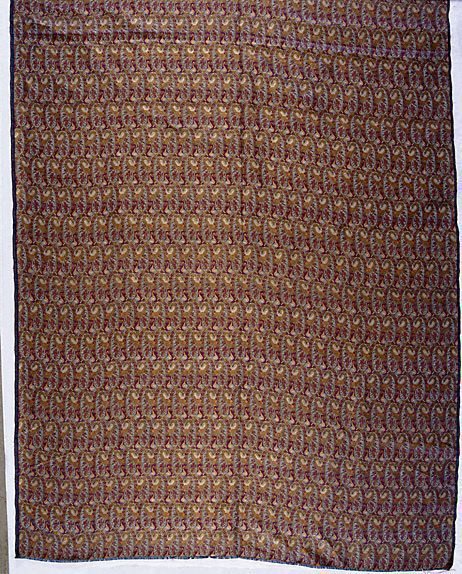 This sumptuous and densely woven brocade sari is in a style of weave known as 'tanchoi', a style of textile originating in China, initially as part of the 19th century Parsi trade between India, China and England. The saris were popular amongst the Zoroastrian Parsi communities in Bombay and appear to have been originally imported from China from the mid-late 19th century and woven in very bright colours such as lemon yellow, pink and bright blue. Three Parsi brothers learnt the weaving technique in China. They later manufactured the saris in Bombay (Mumbai) and then introduced it to Indian weavers in Surat, Gujarat. This example of a 'tanchoi' sari, with its intricate paisley design adheres to the traditional bold colour scheme. Later versions of these saris, produced by Varanasi weavers, have a rather more 'Indianised' colour scheme and might even incorporate gold thread 'zari' work. The Varanasi producers were able to make less expensive versions of this brocade and eventually forced the original Bombay weavers out of business.