'Cadence #1 (a short span of time)' 2003, was exhibited at the AGNSW in its complete version for the first time. Science and reverie are united in this overwhelming and immersive field of subtly graded high-keyed colour variations. It was initially conceived for a competition for a public artwork for the foyer of the Bureau of Meteorology in Melbourne. Owen's very personal response to the imprecise science of predicting the weather was to devise his own chart to record his emotions over an 80-day period. 'I thought if they can measure atmosphere, I must be able to measure emotions. So using a colour tabulation, I intuitively picked how I felt every half hour during the day.'

The grids that form the structuring terms in this suite of paintings have been designed with a computer program in which Owen could insert the colours that reflected his emotional state into a chart or graph. Owen concurrently worked with a colour specialist to mix over 2500 colour tones to translate the charts into these paintings. While in reproduction the reduced paintings have the appearance of being almost pixilated, emulating the flat colours of the computer screen, in reality the paint has an almost plush density, creating a richly nuanced experience of colour and light in space. Like 'Sunrise #2', these paintings are almost wall reliefs as the intense colour hues create a shifting perceptual field that is anything but flat. The physical coordinates of the work, the actual application of paint in carefully gridded squares, are hard to precisely locate visually due to the overwhelming number of colour tones and the optical effect of colour variations pulsing and shimmering across the field of the painting and into our space.

Any attempt at a literal decoding of Owen's emotions is thwarted by not having a colour key that matches his feelings. But the very thought of such a key existing illustrates its impossibility: how could words be found to describe the myriad subtle variations apparent in the colours? While we may deduce what certain colour tones may correspond to, with so many shades to choose from it is our own emotive and psychological response to colour that is called upon. 'Cadence' itself is a musical term that denotes rhythm, but it also refers to intonation and the sound of the voice. Against the anonymity of the rationalist grid is set a visual equivalent of what Barthes has described as the 'grain of the voice' which lifts the pedestrian into the extraordinary, 'the "grain" is the body in the voice as it sings, the hand as it writes, the limb as it performs.' In this suite of painting an equivalent can be found in the nuanced colour selections, evidence of the artist's own physical transcription of psychological states, which itself suggests something of the materiality of vision as it calls for both an emotional and a bodily response on our part.

Browse other works by Robert Owen 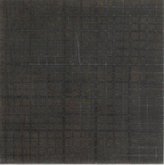 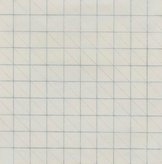