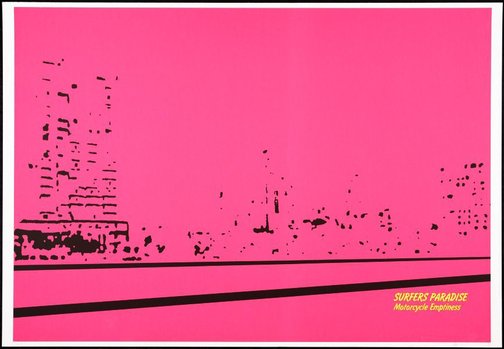 Scott Redford's layered body of work embodies a synthesis of regionalism, identity, abstraction and pop culture. Growing up on the Gold Coast and living in Brisbane, Redford has remained resolutely committed to the iconography of his region: surfboards, motorbikes, palms trees and high rise apartment blocks appear regularly. His interest in subcultural identities feeds into this iconography and surfers, bikers or men who may or may not desire other men also inhabit his imagery.

In the 'Motorcycle emptiness' series, a Surfers Paradise streetscape moves from a fuller though schematic representation to pixilation. In all three prints it is abstracted though and coloured in a pop pink and black which removes it even further from any sense of realism. The title suggests speed, the subculture of the bikie, and also implies a cultural emptiness to the scene depicted. Redford is not judgemental of Surfers Paradise however; rather he finds it a rich source of anthropological observation. The emptiness implied in the title is much literal as it is metaphorical, and it could refer equally to empty streets and empty out of season apartments.

Brett Adlington and Scott Redford, The contents of these paintings is secret, known only to the people of Surfers Paradise: Scott Redford and the Gold Coast, 'Make believe fun is just as good as real fun', pg. 49-89, Gold Coast, 2005, 62-63 (colour illus.), 132-133 (colour illus.), 157. not AGNSW impression; pg. 132-133 photographed as part of installation 'Sculpture to lean against and discuss pictures'