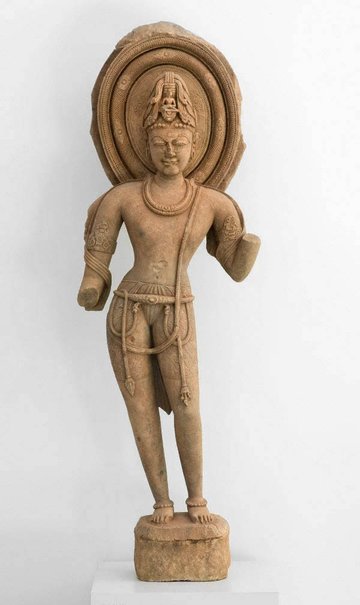 These majestic and monumental sculptures in the round of the Buddhist deities Tara (Acc.no. 28.2003) and Avalokiteshvara (Acc.no.29.2003) are unique examples of a little known style of Indian Buddhist imagery. These figures have features and characteristics typical of the 'medieval' Pratihara style of Indian sculpture, but unusually, are representations of Buddhist deities. The Pratiharas were great patrons of Hindu and Jain architecture and sculpture, but were not known as followers or patrons of Buddhism. However, the Pratihara territories did border Pala regions and their rule was coincidental with the period of Pala dominance in the West of India, the Pala rulers gaining much of their political and economic strength by being at the centre of the Buddhist world. Taking this into consideration, it is possible that either these sculptures were made as a gift or royal donation by Pratihara rulers to a Buddhist temple in these Pala regions or that Pratihara artisans were working on Buddhist commissions, especially once the power of the Pratiharas began to wane around the 10th century. However, with most of the Buddhist monuments of this period having been destroyed by Muslim invasions of the 12th century, there is very little known today about these kinds of images.

Stylistically, these figures are typical of Pratihara images of this period: the sculpture of Tara is depicted in 'samapada', that is, in an upright standing pose, suggesting that this sculpture was made as a primary image intended as a focus of worship. The sensuous form of the goddesses' body conforms with the ideals of Indian iconography, the torso having the hourglass form of 'damaru' (double-headed drum), with rounded shoulders, full spherical breasts with the lines of the ribs indicated below, soft belly and tapering limbs. The image of Avalokiteshvara is in the flexed 'tribhanga' (triple bend) pose typical of Indian sculpture, the bodhisattva having a broad chest with rounded shoulders and tapering limbs, the modelling of the body being quite flat as compared with the voluptuous form of the goddess. However, as with much Indian sculpture of this period, the sculptor's concern was not with physiognomical correctness, but with giving the body a breathing quality of form. Here, as is typical of most Indian sculpture of this period, it is the ornaments worn by the deities that articulate and define their sensuous forms. On her upper body the goddess, Tara wears a thick beaded torque with a long twisted necklace the circular pendant of which falls to the hip. A jewelled girdle is used to fasten the fine fabric of her gathered-and-tucked lower garment. Anklets adorn her feet and intricate armbands adorn her upper arms. Her hair is arranged in a large bun held by a beaded fillet with two rows of curls along the brow and adorned with jewelled ornaments. The ornamentation of Avalokiteshvara is comparable, this deity being depicted wearing a short patterned dhoti fastened at the hip by a jewelled girdle, wearing anklets, armbands and an elaborate torque at the neck. An 'urna' adorns the centre of his forehead and characteristically, a figure of the Buddha Amitabha is shown seated in his piled up hair. Both these deities would have held a lotus in their proper left hands and shown the gesture of charity ('varada mudra') with their proper right hands. Both these images are inscribed with a Buddhist creed which is yet to be translated.

John Siudmak Asian Art, 2001, London/England, purchased by the dealer from a private collection