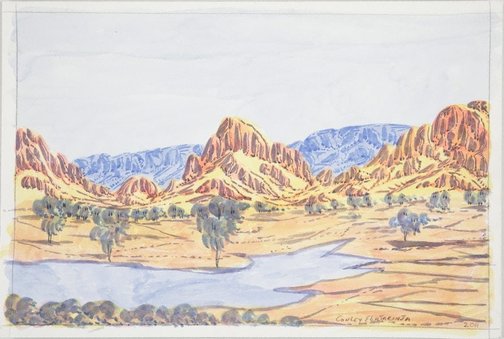 ‘This painting is of a place just out west from Larapinta Town Camp. Out there on the MacDonnell Ranges. I can remember it in my head and I painted it at home at Larapinta’. Conley Ebatarinja, 2011

Conley Ebatarinja grew up at Ntaria (Hermannsburg) and learnt to paint by watching his father, Arnulf Ebatarinja, work. As a teenager he assisted his father in mixing colours and at a relatively young age began to produce his own works in the classic Hermannsburg style, synonymous with Albert Namatjira. He now paints through Yarranyty Artlere Artists which runs a range of art programs in Larapinta Valley town camp on the outskirts of Mparntwe (Alice Springs).

Living away from country, Ebatarinja paints from memory, from what he has seen and from the stories his father told him as a child. ‘Untitled’ 2011 depicts the ubiquitous MacDonnell Ranges, a favoured subject of many watercolour artists of the Hermannsburg School. In this work Ebatarinja provides a clear view of the majestic ranges in fine detail and brilliant colour. In contrast, little definition is given to the features of the foreground, with plain trees dotting the landscape and the water painted in simple blues, with no attempt to show any form of reflection, so expertly achieved in the work of Namatjira. Rather than detract from the work, this adds to the power of the mountain range and offers a unique approach to the foreground, with a flattened perspective and the use of seemingly awkward angular line work used to delineate forms and space.

watercolour on wove paper on card