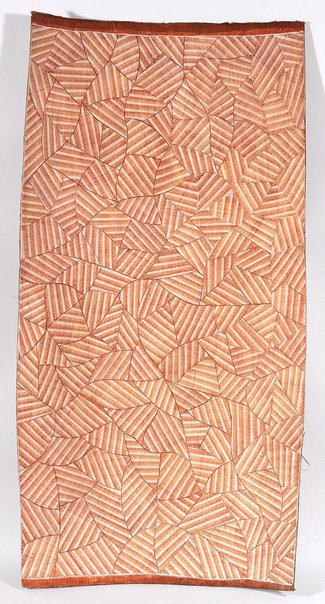 The artist has painted kunkurra, the spiralling wind associated with several sites in the Kardbam clan estate. On one level, this painting can be interpreted as a depiction of the mini-cyclones common during the wet season in Arnhem Land, where the artist lives. Kunkurra also relates specifically to a site called Bilwoyinj, near Mankorlod, on Namunjdja's clan estate. At this site, two of the most important Kuninjku creation beings, a father and son, known as the Nakorrkko, hunted and ate a goanna. They left some of the goanna fat behind, which turned into the rock that still stands there today.

The word 'Bilwoyinj' - the name of this site - also refers to the goanna fat. The Bilwoyinj site is also a ceremonial ground for Yabbadurruwa, a major ceremony owned by the Yirridjdja patrimoiety. The Yabbadurruwa ceremony is primarily concerned with initiation, land ownership and promoting the cyclical regeneration of the human and natural worlds.

Browse other works by Samuel Namunjdja