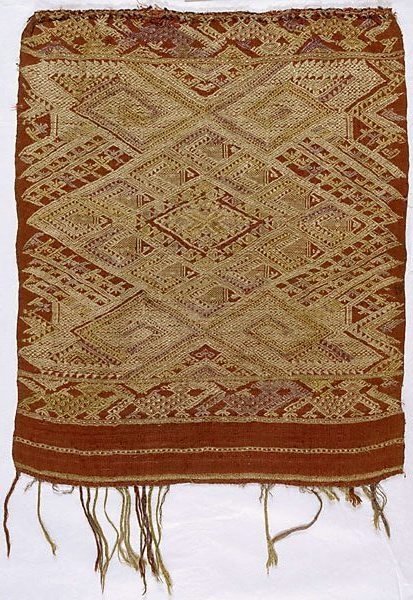 This piece comes from the end of a 'phaa biang', a textile type that is composed of several sections. As sections become worn, they are replaced, and this is probably one such replacement. Lao-Tai women wrap phaa biang cloths around one shoulder and the torso. These cloths are also used for healing practices ('phaa sabai'), as head wraps ('phaa khan soeng'), and as shoulder cloths ('phaa phai'). As a curative cloth, the textile was believed to be powerful enough to help the healing process through its combination of colours and motifs.

This 'phaa biang' has red warp and weft threads. The patterns are mostly made of discontinuous supplementary weft threads, but the two white and yellow rows of narrow patterning near the fringe are composed of continuous supplementary weft yarns. The designs here include 'naak phan haang' (river dragons with entwined tails) that can be seen on the top and bottom of the textile below the large central diamond. The central lozenge is decorated with 'kaap' (house gable) and other stylised patterns. The use of concentric diamond shapes is called kaap khoam meaning lantern. The pattern not only symbolises light, but Buddhists consider it to be the opening of the third eye bringing knowledge and enlightenment. This is probably a remnant of Mahayana and Tantric Buddhist ideas and is evidence of their earlier presence in Southeast Asia. On either side of the central panel are two narrow bands filled with crudely produced hong (mythical bird) motifs, though it is also possible that they are 'saang hong' (elephant-birds) or 'nok haang khot' (birds with bent tails). 'Phaa biang' are not only used for ceremonial purposes, but they also function as carrying cloths, bathing cloths, and decorative textiles. The quality of the cloth itself in part determines the use of the piece. Silk ones would be worn to ceremonies, whereas cotton ones are less significant.