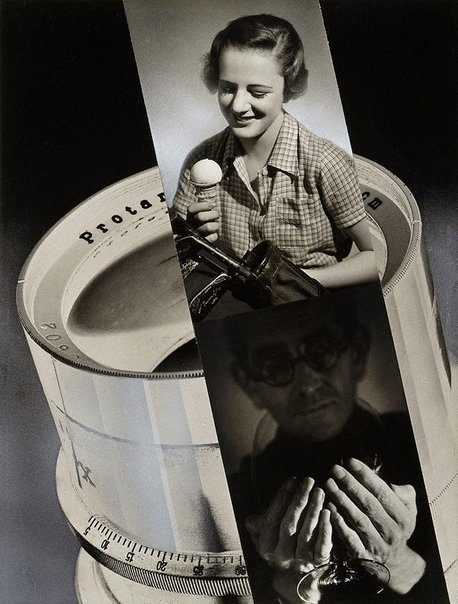 It is no longer known what this collage was advertising, or if it was an experiment in the form of photo-collage for advertising by Dupain. Certainly it was informed by Bauhaus experiments and those by László Moholy-Nagy. Dupain would have had access to Moholy-Nagy’s writing in ‘Painting, photography, film’ 1925 as it was advertised in the ‘Australasian Photo-Review’ in 1930 and in 1938 Dupain noted the importance of the thought of Moholy-Nagy in a letter to the ‘Sydney Morning Herald’.1 Moholy-Nagy furthered the idea of photomontage into what he called ‘photoplastics’ which presented ‘organised chaos’ as distinct from what he considered to be the dadaist’s more brutal use of montage. Comparing photoplastics to what happens when we travel in the city – seeing overlapping visual fragments which come together to make a visual synthesis – Moholy-Nagy goes on to say: ‘speculative-associative and visual-sensory components result here [in photoplastics] in superimpositions and interpenetrations.’2

Similarly, Dupain has carefully taken at least three different photographs using one (the camera lens) as a background. He has placed the other two, which are cut in narrow strips, on a diagonal though the middle of the background image. The viewer is obliged to make sense of the three images, one of which shows a young woman about to eat an icecream while carrying golf clubs, the other an older man handling a brandy snifter. These could be defined as leisure activities, as well as those of consumption which may relate to the act of using a quality camera.