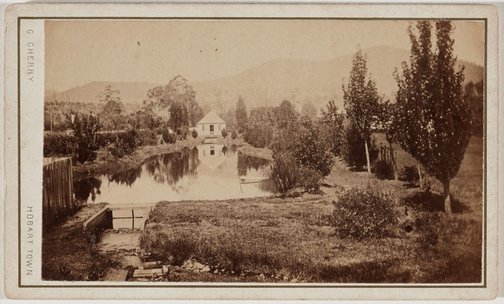 George Cherry was a professional photographer, inventor and penal officer. Born in England, he arrived in Australia in 1848 in Hobart Town, where he established a daguerreotype studio until taking up the post of assistant superintendant of convicts on Norfolk Island in 1849. While on Norfolk Island, Cherry took daguerreotype views which he reproduced as lithographs. His objection to the treatment of inmates in the penal colony led to his departure from Norfolk Island and he resettled in Hobart Town in 1852. He established a second daguerreotype studio and gallery there in 1854. He advertised ‘Photographic Portraits on paper, glass and ivory, and on canvas from life to locket size, highly finished in Crayon, Water or Oil Colours and warranted to be as durable as the most permanent oil paintings’. A photograph of Bishop Nixon, enlarged to 75.5 x 65.5 cm, and overpainted by John Dixon, is one of his most magisterial productions and was exhibited at the 1866 Intercolonial Exhibition in Melbourne. In 1867 Cherry purchased Frith & Co’s collection of portrait negatives, thus acquiring their clientele. The following year he was one of the photographers appointed to document the Duke of Edinburgh’s Tasmanian tour.