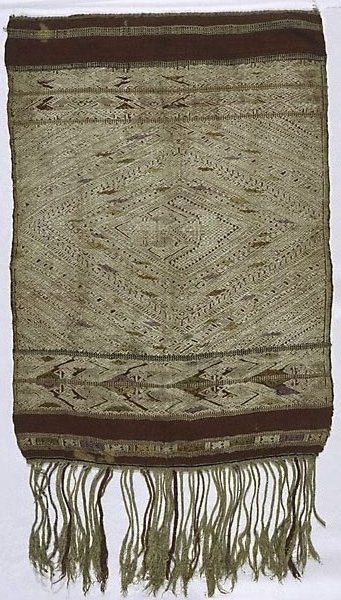 This textile has red warp and weft yarns, cream continuous supplementary weft yarns, and multi-coloured discontinuous supplementary weft yarns. Cloths like this form part of a scarf made in several sections that are replaced as they wear out. These textiles have a number of functions, including as shoulder cloths (phaa phai), a cloth to wrap women's shoulders and torsos (phaa biang), head wraps (phaa khan soeng), and for healing practices (phaa sabai). Besides the central lozenge-shaped motif (kaap khoam), there are half-line hooks (dork khor), eight-pointed stars or flowers, and triangle forms, all of which are composed of supplementary weft threads. Kaap khoam means lantern. The pattern not only symbolises light, but Buddhists consider it to be the opening of the third eye bringing knowledge and enlightenment. This is probably a remnant of Mahayana and Tantric Buddhist ideas and is evidence of their earlier presence in Southeast Asia. Phaa biang are composed of several sections, and as sections become worn, they are replaced with new weavings. This is probably one such replacement.