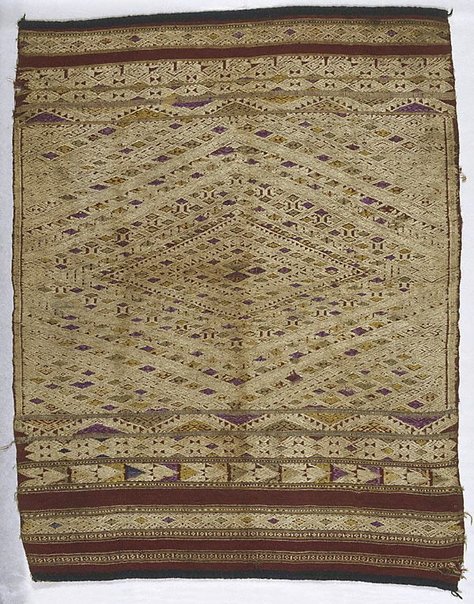 This textile is a bowing cloth. These are small square textiles that are placed on the floor and the worshipper touches his or her head to it when bowing before the Buddha or religious practitioner. According to Leedom Lefferts, this increases the honour of the obeisance. The decoration of this cloth consists of cream continuous supplementary weft yarns and multi-coloured discontinuous supplementary weft threads. The warp and weft threads of the base fabric are red. The concentric lozenge shape is called kaap khoam meaning lantern. The pattern not only symbolises light, but Buddhists consider it to be the opening of the third eye bringing knowledge and enlightenment. This is probably a remnant of Mahayana and Tantric Buddhist ideas and is evidence of their earlier presence in Southeast Asia. Shamans' cloths also have this pattern to guide the shamans in the supernatural world. Sometimes shamans use these pieces as healing cloths. The complexity of the design is a deliberate effort to puzzle the eye, which provides protection against evil. Patterns associated with shamanism often include an asymmetrical distribution of colour that does not repeat itself. The colours in Buddhist cloths, however, are usually symmetrical and balanced. While the colour arrangement here is not totally symmetrical, the overall appearance of the cloth is stable, and thus, the weaver probably produced it for use in Buddhist worship.