Cloth with border design of animals 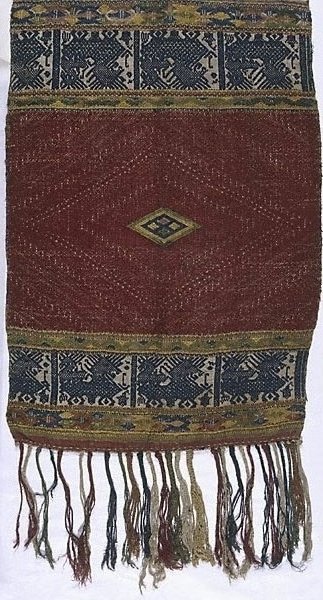 This piece comes from the end of a 'phaa biang', a textile type that is composed of several sections. As sections become worn, they are replaced, and this is probably one such replacement. Lao-Tai women wrap 'phaa biang' cloths around one shoulder and the torso. These cloths are also used for healing practices ('phaa sabai'), as head wraps (phaa khan soeng), and as shoulder cloths ('phaa phai'). As a curative cloth, the textile was believed to be powerful enough to help the healing process through its combination of colours and motifs. The motifs include the 'singaraja', a lion, with its young on its back, X shapes, abstract flower patterns, especially eight-pointed designs, and the kaap khoam design - the lozenge shaped motif - the centre of which is in multi-coloured continuous supplementary weft. 'Kaap khoam' means lantern. The pattern not only symbolises light, but Buddhists consider it to be the opening of the third eye bringing knowledge and enlightenment. This is probably a remnant of Mahayana and Tantric Buddhist ideas and is evidence of their earlier presence in Southeast Asia. The central pattern is framed by a wide band of indigo-blue cotton continuous supplementary weft patterns - in this case the singaraja. Thin rows of discontinuous supplementary weft motifs are placed on each side of these wide bands. The cotton supplementary yarns are thick and have been doubled, so that the ground cloth with silk warp threads is not easily visible. A multi-coloured fringe along the edge is made from separate yarns.

Cloth with border design of animals