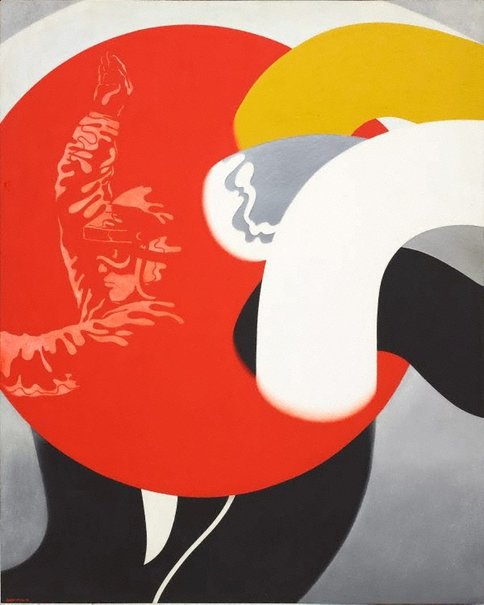 There were relatively few women Pop artists in the 1960s and 70s and most have disappeared from the history of the period. Worldwide, women artists are currently being retrieved and restored to Pop's history with major exhibitions in recent years in the United States and Europe focussing on their significant contribution.

Bridgid McLean's paintings are as accomplished as any of her international peers and fascinatingly her subject from c1968 to c1974 was the testosterone fuelled world of racing cars and their (male) drivers. Conflating man and vehicle, her paintings were often generically titled 'Machines'. These were critically acclaimed when exhibited in her first solo exhibition, in 1973 at Watters Gallery in Sydney. Artist and critic James Gleeson wrote in The Sun:

"Brigid (sic) McLean makes a spectacular debut at the Watters Gallery with a series of meticulously painted and finely designed works based on the automobile, racing cars and engine parts.

Her technique is remarkably painstaking and exact - relying largely on masking tape and the spray gun - and both theme and treatment can be traced back to American pop art.

Nevertheless Bridgid McLean's paintings are pop art with a difference.

She does not regard the automobile as a symbol of our time but as an object of aesthetic beauty. She admires a racing car in much the same way as Poussin admired the ruins of the Roman Campagna...".

In the mid 1970s McLean's practice changed. While still Pop inflected, her works from this period recall American west coast funk and the distinctive work of the Chicago imagists. Smaller in scale and highly detailed, McLean subjects people and body parts to pressure and in some works they literally pop open as plungers are pushed and weight exerted, while in others figures sprout multiple eyes and kidneys. They are meticulously made, reflected in the specific materials listed by the artist which also suggest the detailed and considered process involved in making them.

Browse other works by Bridgid McLean 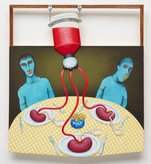