Actor Sawamura Tanosuke II as Yaoya Oshichi, climbing a ladder to beat a fire alarm drum and Bando Jiro as Nita/Nitta Jiro., from an album of 'ukiyo-e' woodblock prints of 'kabuki' actors 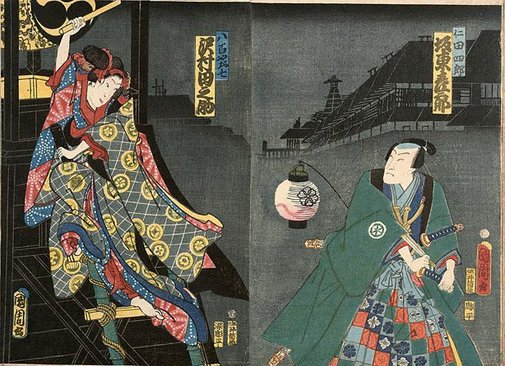 The album includes 27 multiple-sheet sets and 7 single-sheet prints, mostly dating from the early 1860s and therefore representing the last flowering of the 'ukiyo-e' woodblock print tradition. Published as sheet prints and bound together soon after publication by a Japanese collector, the prints have survived in superb condition. Almost without exception, they are fine impressions. They all show the brilliant colours typical of the period, when imported aniline dyes were being used to dramatic effect.

Actor Sawamura Tanosuke II as Yaoya Oshichi, climbing a ladder to beat a fire alarm drum and Bando Jiro as Nita/Nitta Jiro. The play was based on an actual incident in 1681 when the real Oshichi, daughter of a greengrocer, fell in love with a young priest whom she met at his temple while seeking shelter from a large fire. Hoping to see him again, she set fire to her own home, causing a massive blaze that led to her execution for arson. Yaoya Oshichi became a legend and a leading character in several Kabuki plays. In the play she raises a fire alarm by beating a drum, knowing that the penalty for raising a false alarm is death by immolation.

Browse other works by Utagawa YOSHICHIKA